Karpaz Peninsula (also known as Karpas or Karpass Peninsula and Karpasia) in Northern Cyprus is a wonderful destination for both outdoor-enthusiasts and travelers interested in history and culture. This area, covering the long, narrow peninsula in the northeastern corner of the island, is rural and sparsely populated. Time seems to have stopped in the sleepy small towns and villages, the golden beaches are nearly empty, and donkeys roam free in the remote national park. In this post we introduce some of the sights in Karpaz Peninsula, as well as an itinerary for a road trip around this unique area.

Karpasia is part of Northern Cyprus and Famagusta district. Northern Cyprus, calling itself as the Turkish Republic of Northern Cyprus, is only recognized as a state by Turkey, and considered by the Republic of Cyprus (and the rest of the world) to be an area of Cyprus, occupied by Turkey. This means, among many other things, that the northern part of the country sees a lot less visitors than the south, and the travel destinations in the northern side are much less known as the ones in southern side. However, traveling in Northern Cyprus is safe and there are wonderful destinations to explore. Most of the tourists coming to North Cyprus stay around Kyrenia District, but we warmly recommend getting to know Karpasia as well.

Due to its shape, Karpaz Peninsula is sometimes called the ‘tail of Cyprus’ or the ‘handle of a pan’. Reaching northeast, this 80 km long peninsula has mountainous inland and a long coastline dotted with beaches, small harbors and coastal cliffs. Flora and fauna are special, and the typical species include nesting turtles and endangered monk seals, as well as unknown amount of wild donkeys. Traditional industry includes agriculture and fishing, but tourism, and especially eco-tourism, in the area is developing.

Dipkarpaz, also known as Rizokarpaso is one of the biggest towns on the whole Karpasia, and the entrance point to the tip of the peninsula. This charming town is home to notable amount of Greek Cypriots, and the story tells and that around here people didn’t let the turbulence of 1974 and the split of the island affect in their life, and Greek Cypriots continued living in piece with Turkish Cypriots. Side by side are also the handsome Orthodox church and the Dipkarpaz mosque. For visitors Dipkarpaz offers services like restaurants and small shops, and there are also some accommodation options in the village. From Dipkarpaz the main road to the tip of the island runs along the southern shore, but there is a dirt road to 10th century Ayios Philon Church and ruins of Ancient Aphendrika on the northern shore. We didn’t have time to explore these sites, but based on pictures, they for sure are worth a visit, and could be added on a route of a longer hike in Kapraz National Park.

Karpaz Peninsula has been inhabited since ancient times, and holds some remains of ancient cities, harbors and religious sites. As tourism is not yet very developed in this area, it’s possible, at least out of the summer months, to explore most of the sights just by yourself. In this chapter we shortly introduce some of the Byzantine churches, cave tombs and monasteries of Karpasia. Check out the provided map for the locations of these sites and a suggestion for a driving route. 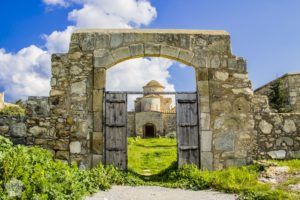 The site of Panaghia Kanakaria church and monastery lies just next to the village of Boltasli. The first church on this site was built during early Byzantine times, and oldest parts of current remains are of a church and a monastery built in the late 5th century. Stone church was destroyed and rebuilt several times during the history, and the current church was completed in 14th century. The apse of the original church was covered in mosaics, that survived the destruction of religious images in 8th and 9th century, and are considered as some of the most important surviving pieces of early Christian art. To see these mosaics today, head to the Byzantine museum in Nicosia. In the existing church, there is a fresco of Jesus and Mary in the outer wall, above the south door. The site is quite picturesque, and the church can be captured together with a mosque on the other side of the road. 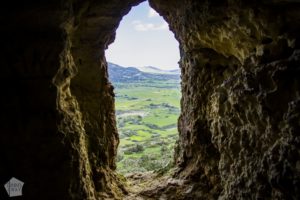 Carved in a cliff near the village of Avtepe, the Elisis Kastros Ancient Cave Tombs is an extraordinary sight. Surrounded by lush nature, there is a staircase leading 20 meters up to the opening in a cliff-side. There is a 26 meters long central space with several tomb caves on each side and a deep well in the end of the hallway. This tomb cave was built during the Classic-Hellenistic Period in 5th to 6th century BC, but was never fully completed and probably never actually used for burials. One local tale tell that criminals were once thrown down the well, and another tale that the cave was used as a hiding place by thieves that had robbed passing camel caravans. To reach this site, you need to walk a couple of kilometers from the main road, unless you dare to try the dirt roads with a 4×4 to get closer to the entrance. There is also another cave tomb in nearby Kaleburnu village, called the Kastros Hills Ancient Cave Tomb.

Probably the most visited sight in Karpaz Peninsula is the Apostolos Andreas Monastery next to the tip of the peninsula. This monastery has been for long an important resting place for Orthodox pilgrims, known of its healing, holy waters. People from all over the world come here to pray for healing and offer their devotion. The oldest part of the current monastery is a 15th century chapel near the coastline, but there has been a monastery on the site much longer. We didn’t enjoy visiting this site as much as the others, because it’s so popular and touristic, visited by busloads of people on sightseeing tours. Site is also home to not-so-wild donkeys that beg for food from tourists, even standing in the middle of the road and stopping the passing cars. Cute fellows, but not much to with the actual wild donkeys of Karpasia. 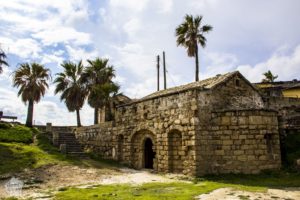 Close to the seashore, east from the town of Yeni Erenköy (Gialousa), is the popular Ayios Thyrsos Church. The new church from 1911 has been built just next to the main road, so it’s impossible to miss, but the historical small church is down by the rocky coastline. The 16th or 17th century stone church is named after St Thyrsos, Bishop of Karpasia, and it’s said that holy water used to flow in the underground room of the church. This church seems to be on the route of tour buses, so you may need to share it with a lot of other visitors. It’s worth a quick stop anyway.

Continuing towards west from Ayios Thyrsos Church, there is a crossroads to a smaller road leading to village of Sipahi (Agia Trias). Along this road are the ruins of Ayios Trias Basilica, that is famous for its floor mosaics. The basilica dates back to late 5th or early 6th century, but was destroyed during the Arab raids already in the 7th century. The ruins with mosaics were hidden below the surface for a long time, and accidentally discovered in 1957. There are also ruins of other buildings and a small church in the site, and probably there is more to be excavated still. 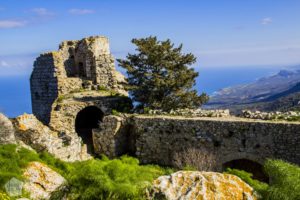 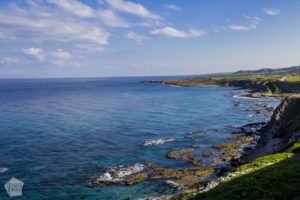 Karpaz National Park covers most of the peninsula east from Dipkarpaz. The national park is home to rich flora and fauna from wild sheep to great variety of birds and from turtles to endemic butterflies. The most famous residents of the park however are the wild Cyprus donkeys, that roam free in the national park. These shy creatures are descendants of donkeys that were held as farm animals, but abandoned in 1974 when people had to leave their homes due to the tragic split of the island. Donkeys were then gathered together and moved to Karpasia, where the vegetation provided them a new environment to live. It’s very well possible to see some of the donkeys when walking in the national park area, but be sure to not go too close as they do have a temper.

There are some hiking trails in the park, but it’s pretty hard to find information online, and the trails are poorly marked. We made a short trek close to the tip of the island, following trails that are visible in maps.me map application. Camping in the park area is not forbidden, as long as you don’t light a camp fire, so it’s very well possible to make longer hikes, staying the nights in the wild and exploring some of the historical sites along the trek.

How to get to Karpasia then? This remote area of Northern Cyprus is not very well covered with public transportation. It should be possible to catch a bus until Dipkarpaz from Kyrenia, but schedules are obscure to say the least. To be able to move around Karpaz Peninsula, we warmly recommend renting a car. There are also organized tours from hotels around Northern Cyprus, but we would avoid those since they only take you to certain sights and are, well, a bit over-touristic at least to our taste.

To explore Karpasia, reserve at least three days, preferably more. Accommodation options are increasing as the tourism develops, and it’s easy to find family run bed & breakfasts and home stays in towns and villages, and even hotels and bungalows by the beaches. Eco-tourism is developing, and it’s possible to stay in farm-style facilities. We found via Airbnb a great place called Çamaltı Büfe, near the village of Kumyali. Read more about this recently opened hostel / farm stay in this recommendation post.

Karpasia can be visited throughout the year. The high season is during the summer, but the mid-summer months can be unpleasantly hot. Consider going during spring, when the flowers bloom and nature is green. We made our road trip in Karpaz Peninsula in February, and got to enjoy the lush nature after the winter rains. However, it was still raining quite often, and thus part of the trails were wet and muddy. Around April would probably be the best time to go, since by then it’s already warm and sunny, but the nature is still green and there are flowers everywhere. Early autumn would for sure be good time also, though by then the summer heat has burned part of the vegetation brown.

Read more about destinations in North Cyprus from below posts, and consider adding also these places in the itinerary of your travels in Northern Cyprus; 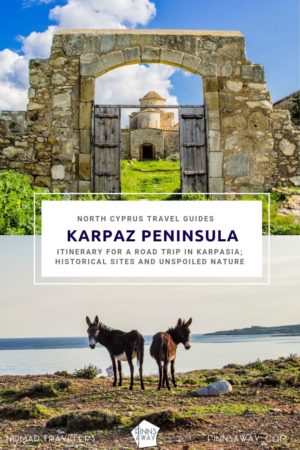 2 thoughts on “Cyprus: Nature and history in Karpaz Peninsula”