The walled city of Famagusta 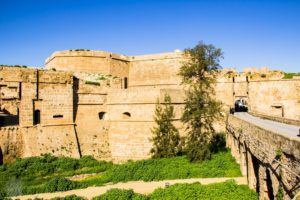 North Cyprus is much less visited than the Greek Cyprus in the south, but holds some amazing travel destinations. One of them is the walled old town of Famagusta, with huge amount of well-preserved Medieval buildings. The city has a complicated past related to the conflict between Greek and Turkish Cypriots, and the tragic split of the island, that left countless homes empty in both sides. The UN buffer zone called the Green Line has been between the Greek and Turkish sides since 1974 (partly already 1964). Famagusta (Gazimagusa) lies on the east coast of Cyprus, just north from the border zone, and is a popular tourist destination, for a reason. In this post we walk you through the interesting history of Famagusta, introduce some of the main sights and provide practical info about visiting the city.

The history of Famagusta in a nutshell

Early days and the Middle Ages

The village of Famagusta, back then known as Arsino, was founded already around 300 BC by an Egyptian King Ptolemy Filadelfus. A few hundred years later the population of Famagusta started to increase, after the nearby city of Salamis, nowadays an archaeological site, was badly damaged as a result of several earthquakes, and  also suffered from Arab raids. For long Famagusta was still merely a small fishing and port town, but started developing to a city under Lusignan rule in 12th century AC, when also the high city walls were built. The natural harbor increased the importance of the town as a trading place. The port was conquered by Genoans in 1372 and by Venetians in 1489, but the development and bloom of the city continued, and a huge amount of churches and palaces were built during the Middle Ages. 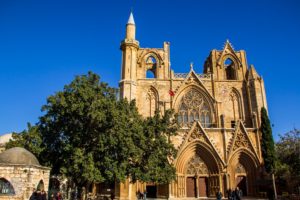 Turkish forces rolled in Cyprus in 1570. Famagusta, or Gazimagusa in Turkish, was the last stronghold of Venetian Cyprus, resisting Ottomans for 13 months before surrending. Greek Cypriots were forced to leave the walled city in 1573-74, and many of them settled in the area on the south side of the city walls, later known as Varosha. Even if a lot of Turkish families were resettled in Famagusta, the population of the city decreased, and it started to lose importance as a trade center. Ottomans converted the Cathedral of St. Nicholas into a mosque, built a bazaar area and overall changed the layout of the city according to Turkish traditions.

The Ottoman era ended after the Russo-Turkish War in 1878, and Cyprus became a part of British Empire. Ottomans continued ruling the island though, until Great Britain declared a war against the Ottomans during the WWI. Under British rule, Famagusta started to flourish again as a port and trade city. Varosha area outside the walls developed quickly, and became an administrative center as well a tourist destination. By 1960 the amount of Turkish population in Famagusta had diminished down to 17,5 %, while 70 % of the citizens were Greek Cypriots. The British rule ended in 1960, when the Republic of Cyprus was founded. 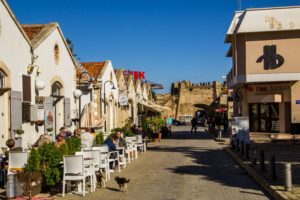 After the independence, Famagusta and especially Varosha developed to a popular tourist and entertainment center. The beaches and luxury hotels of Varosha were famous worldwide, and visited by celebrities like Elizabeth Taylor and Brigitte Bardot. In early 70’s over 30 % of all the hotels in Cyprus were in Famagusta area, and industry flourished as well. Meanwhile, the conflicts between Greek and Turkish Cypriots around the island turned more violent, and UN sent the first peacekeepers in Cyprus already in 1964. In 1974, Greek nationalists put a military coup into operation, and as a countermeasure, Turkish Army invaded the northern parts of the island. Famagusta was bombed and Turkish Army took control of the city only in two days. The whole Greek Cypriot populationfled the city quickly, thinking that after the violence had calmed down, they could return. However, the whole Varosha area was fenced off by Turkish Army, and it still remains so. The former living quarters and tourism center has turned into a ghost town.

The walled city of Famagusta, just next to the fenced Varosha, remained lively though, and the modern Famagusta has grown on the north side of the walled old town. Today Famagusta is a harbor city and a commercial hub with a population of over 40 000, as well as the capital of Gazimagusa District of the Turkish Republic of Northern Cyprus. The walled city has seen some renovations lately, and is a true gem with gorgeous, well-preserved medieval buildings. 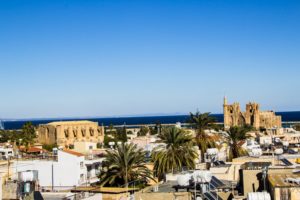 The main entrance to the walled city is the Land Gate in the southwestern corner of the fortification. After entering through the gate, visit the tourist information center just next to it, to collect some leaflets about the city and other sites in the area. There are informative maps introducing the sights; a great help for planning a walking tour around the walled city. The amount of places of interest is astonishing, so reserve at least half a day for exploring the city, or consider staying longer. Below we shortly introduce some of the main sights, and in the gallery you can find pictures of other sights as well. Most tourists include a visit to Palm Beach, south from the walled city, into their itinerary. The main reason is the view to Varosha, with lines of abandoned hotels and other buildings. The area behind the guarded fences can’t be visited, and even taking pictures is prohibited.

The Land Gate is one of the two original entrances to the city. Walk in the Ravalin Bastion next to the gate for great views of the walls and other structures, and visit the former rooms and dungeons. The city walls are three kilometers in length, and there are all together 15 bastions. The ditch outside the walls was added when the walls were modified and strengthened, and it used to be full of water. 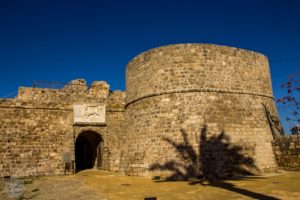 The original internal fortification was built in 1310, and the current castle was re-constructed by Venetians in 1492, in Renaissance style. It’s said that the castle was home to Lieutenant Christoforo Moro, who was the inspiration for Shakespeare’s Othello, and the castle was later named after the Shakespeare’s play. Another version of the story is that the play was actually named after the castle, that again was named Othello after a Venetian governor. Today the castle is a venue for different events, especially during the summer. There is a small entrance fee to the internal part of the citadel.

The Italian Renaissance style Sea Gate is the other original entrance to Famagusta. The gate overlooks the harbor, and is guarded by Venetian Lion statues. Climb on top for views over the city and towards the sea. The main tourist street of the walled city leads from the Sea Gate to St. Nicholas Cathedral.

The most majestic building of the whole city is the huge structure of a church, that has been turned into a mosque. St. Nicholas Cathedral, that is claimed to be one of the most beautiful buildings of the Mediterranean, was constructed between 1298 and 1312 in Gothic style. Lusignan kings came to this church to be ceremonially crowned Kings of Jerusalem. It was also a burial site for several royals. The cathedral was damaged during Ottoman attacks and later by an earthquake. During Ottoman rule it was turned into a mosque. The double towers were taken down, a minaret was built, frescoes were white-washed, tombs emptied and altars demolished. The architecture and facade remained intact though, and the cathedral-mosque is an enchanting sight still today.

How to get to Famagusta

Famagusta is situated in the North Cyprus, which means that to get there from the Republic of Cyprus, you need to cross the border zone. If you are using public transportation, it’s easiest to reach Famagusta by bus from either North Nicosia or Girne (Kyrenia) in North Cyprus. There is no public transportation from Greek Cyprus side. The closest border is just few kilometers south of Famagusta, in the small town of Deryneia, next to Paralimni. It’s possible to walk over the border and to Famagusta, or take a taxi on both sides.

Another way to reach the city is by a rental car. If you rent a car from North Cyprus, there are no border issues. If you rent a car in Greek Cyprus side, you need to buy an additional insurance at the border, but crossing is easy. Read more about renting a car in Cyprus and crossing the border with it in our post. When in Famagusta, don’t skip the nearby Ancient Salamis, one of the most significant archaeological sites in Cyprus. 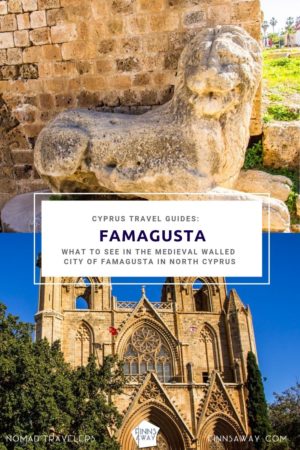 2 thoughts on “Cyprus: The walled city of Famagusta”