Kyrenia mountain range in North Cyprus is home to ruins of three significant medieval castles. The easternmost of them, Kantara Castle (Kantara Kalesi), is situated near the tiny village of Kantara, 70 km east of Girne (Kyrenia). The mountain-top location on an altitude of 600 meters above sea level offers wonderful views to both sides of the mountain range, as well as towards the Karpaz Peninsula in northeast. 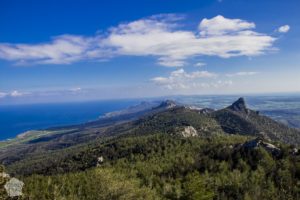 It’s widely believed that Kantara castle was built during the Bysantine period in 7th century, to protect the coastline from Arab raids by serving as a watchtower. However, the exact time of the construction is unknown, and the first written records of the castle date back to year 1191, when it was taken by Richard the Lionheart. After that it was mostly under Lusignan rule, and was an important part of the defense against Genoan attempts to take over the island. The fortification was strengthened in 1391 by King James I, when new strong walls were built around it. Kantara was transformed into a garrison castle, and barracks and a cistern were built.

The Venetians took over Cyprus in 1489. Kantara Castle continued as an important garrison for a while still, but when war tactics changed, the mountain-top castles started to lose their importance. By 1525 the castle was abandoned, and in 1560 it was dismantled. Part of the buildings of the castle ruin remained in quite good shape though. Kantara Castle was classified as historical heritage in 1905, and in 1914 British colonial authorities launched restoration works.

Wandering in the castle ruins 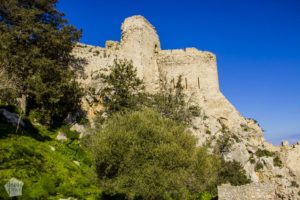 Kantara Castle, as well as the other mountain top castles in Kyrenia mountains, was built in several levels. The ruins include a watch tower, defensive posts and walls, accommodation buildings of soldiers, remains of water cisterns and vaulted rooms. It’s not the most best-reserved castles for sure, but it’s still interesting to wander around the ruins. There are several observation decks, and the views alone make it worth a visit.

We drove up to Kantara castle on one Tuesday morning in early February, and were the only visitors in the whole site! Accompanied only by a cuddly kitten, we walked along the paths that lead to different parts of the castle. It was really quiet up there, just some birds singing, even the wind was calm. To explore all the ruins, require at least one hour for the visit, preferably a bit longer. The paths and steps are mostly easy to walk, but wearing good walking shoes is advisable. Ticket to the castle cost 7 Turkish lira (Feb 2019), which is roughly 1,5 €.

How to get to Kantara Castle 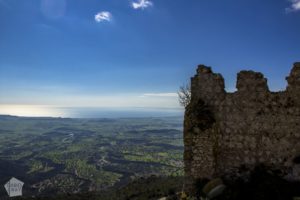 The easiest way to reach the castle is by a (rental) car, and it makes a great stop along a route trip around North Cyprus. As it’s located on a mountain top, the roads leading to the castle are narrow and winding, but in relatively good condition. There is no public transportation to the castle, but some hotels may arrange tours to Kantara and other sights in the area.

Another great way to get to Kantara would be by hiking. There are several hiking paths on the mountains, and one of them, the Kyrenia Mountain Trail goes all the way from Cape Kormakitis (Korukam) in the west to Cape Zafer in the tip of Karpaz Peninsula in east. Long distance hiking in the mountains of North Cyprus requires some planning in advance though, as the trails can be poorly marked, there is not much information available online and finding accommodation can be challenging, but it would surely be amazing experience! 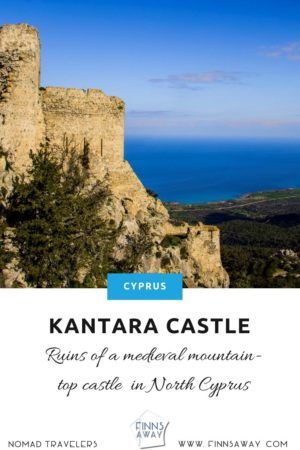