Cyprus may be best know as a beach holiday destination, but it also has a lot to offer for those interested in ancient history and archaeology. There are several significant archaeological sites around the island. One of the most remarkable sites is Ancient Salamis, situated in North Cyprus side, roughly 10 km north from the gorgeous walled old town of Famagusta, and 6 km north of the modern Famagusta. Salamis was an ancient Greek city-state, according to a tradition founded by Teucer, son of king Telamon of Salamis island. In this post we shortly introduce the site and the main sights of it, with some instructions how to get there.

The story of Salamis 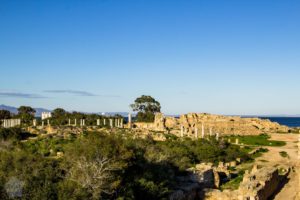 History of Salamis goes back all the way to the Bronze Age, 11th century BC. Remains of a harbor and a cemetery from that period have been found in the excavations of the site. According to archaeologists, the first inhabitants came from the city of Enkomi after an earthquake in 1075 BC. Salamis is mentioned in Assyrian inscriptions from around 800 BC as one of the kingdoms of Cyprus. The town developed to a royal city and a center of trade, and it expanded from the coast, covering large areas inland, part of them nowadays forested.

During Hellenistic and Roman periods, when Paphos was the capital of the island, Salamis was the most important commercial city. Most of the ruins that have been excavated, date back to these centuries, 325 BC to 330 AD. The development of Salamis suffered setbacks due to series of earthquakes in the 1st and 4th century AD, but the city was rebuilt during the Bysantine rule. The harbor was silted up though, and the city also suffered from Arab raids. As a result, the citizens moved to neighboring Famagusta, and Salamis was abandoned.

The former royal city turned into a source of building materials, which damaged the ruins of the city. However, during the years the shifting sands covered part of the structures, and protect them from being totally torn apart. For centuries the ruins of Ancient Salamis were hidden under layers of sand and vegetation. Large scale excavations on the site didn’t start until 1952, and continued until 1974, when funding and excavations in the north side were blocked by south Cyprus. Excavations continued in 1998, but up to 90 % of the ruins are still buried. Nevertheless, it is an impressive site and well worth a visit.

The main sights in Salamis 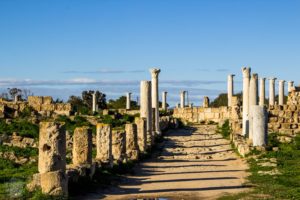 The best preserved ruins in Salamis are just next to the entrance. The massive Theater dates back to the time of Augustus, 30 BC to 14 AD. The ruins have been renovated, and the Theater is again used as a venue for performances. Next to the Theater are the impressive ruins of a Roman Gymnasium and Baths. The first gymnasium was built already during the Hellenistic times, and served as an exercising ground. Parts of the structures and columns in the gymnasium structure actually originally belonged to the Theater. They were brought to the Gymnasium area after an earthquake that destroyed the theater in 4th century. The ruins include swimming pools, sweating rooms, cold rooms and latrines. There are also remains of an aqueduct, a 50 kilometers long water system that used to bring water to Salamis from Kyhrea.

The site continues southwest from the Theater, where you can follow the walking paths past residential areas to the Roman Forum and Temple of Zeus, and to ruins of Kampanopetra Basilica and the Basilica of St Epiphanios. It’s recommended to reserve at least a couple of hours to walk around the Ancient Salamis. The map that is given from the ticket office actually doesn’t include the whole site, just the main ruins, so for a walking tour, take a look at the (quite worn and faded) information boards on the site also.

How to get there 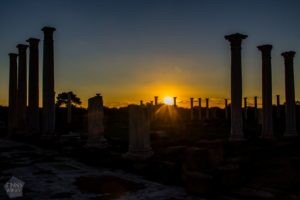 The easiest way to reach Salamis is by a (rental) car, or by taking a taxi from Famagusta. There are also organized tours available at least during the summer season. Using public transportation is a bit tricky, as there is no bus going all the way to the site. There should be, however, buses running from Famagusta along the coastal road, so you could jump out in the Salamis roundabout, and walk from there to the site. Tickets to the site are bought in the entrance, the price in January 2019 was 9 Turkish lira (less than 2 €).

Related post: Renting a car in Cyprus and crossing the border 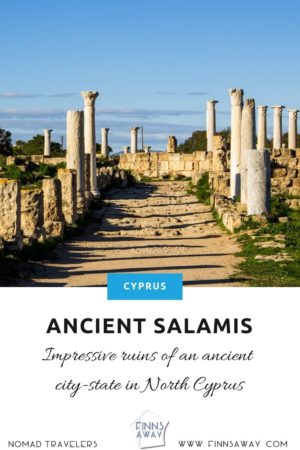