Postcards from the Basque Country

Long story short, the Basque Country is an autonomous community, with its own language, culture and traditions. The history is long and partly uncertain, but most probably the area was inhabited by Basques around 5000 years ago, before the Indo-European languages arrived. Basque language, also known as Euskara or Euskera, is nothing like Spanish languages or French, and actually it’s linguistically unrelated to any other language spoken in Europe, and is one of the oldest languages that are still spoken. The population of Basque Country today is around 3 million, depending on how the area is defined.

The Basque culture would deserve a post of it’s own, but in short, there are a lot of festivals and elements from folklore are important. The most famous Basque festival is the Running of the Bulls, held in Pamplona every July. Basques also have a national sport, a ball game called pelota or pelote. Food and restaurant culture is important, as is wine, of course. The most famous dish are pintxos, Basque version of tapas – it’s basically a small slice of bread topped with different kind of ingredients from veggies to meats, held together with a small stick. Pintxos are usually collected from a counter, and in the end the bill comes based on the amount of sticks that the customer has. 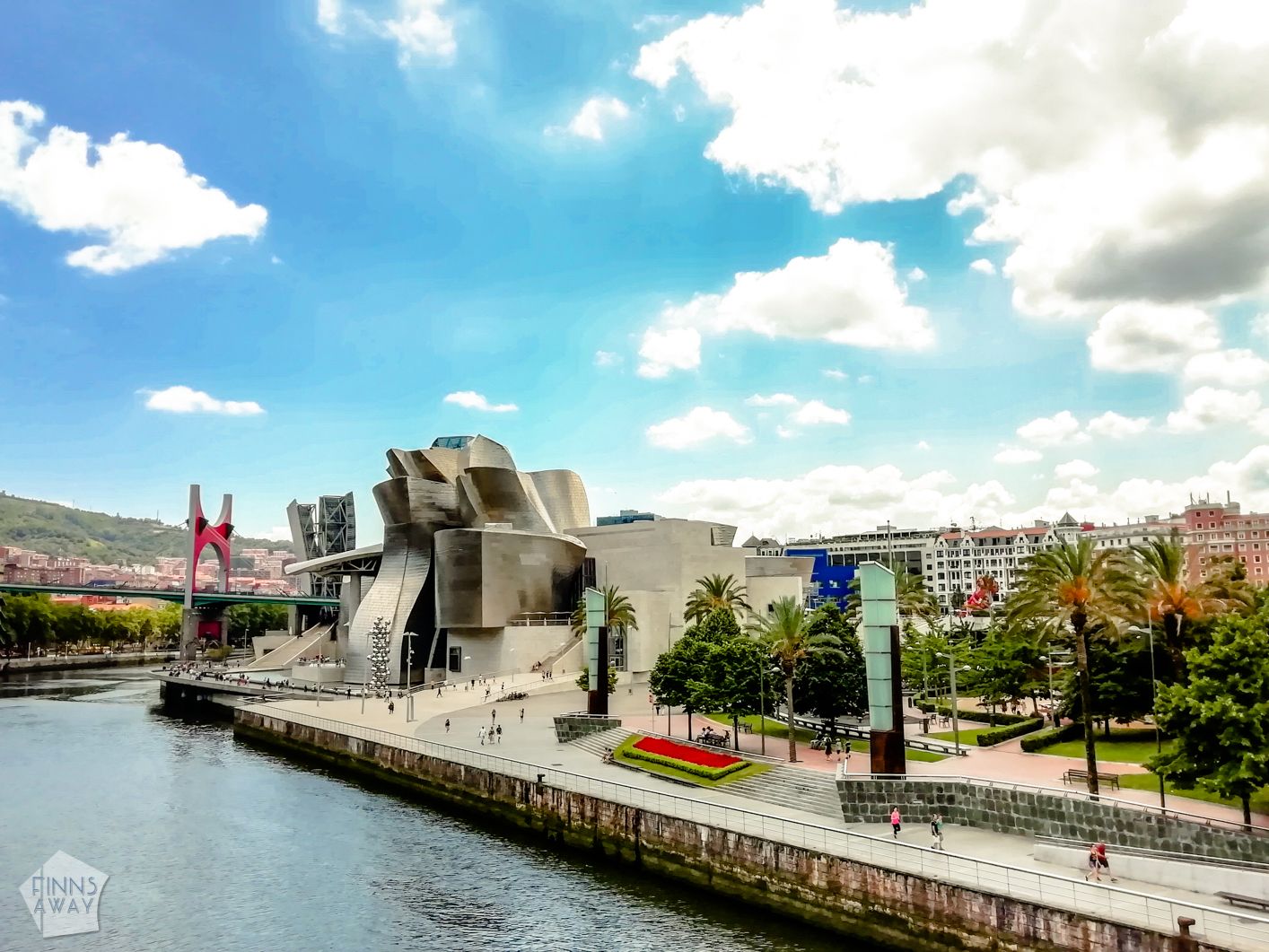 Bilbao is the biggest city of the Basque Country and a lively metropolis with an interesting mix of architecture styles, culture and cuisine. Guggenheim Bilbao is probably the most famous building of the city, and on top of being an art museum, it’s an architectural landmark. It’s said that building the Guggenheim back in 1997 marked a new era for the whole city, and during the years it has seen a series of modernization and rebuilding projects. Even if you, like us, wouldn’t actually go in to this famous art museum, it’s already an experience to explore it, and the sculptures around it, from the outside. 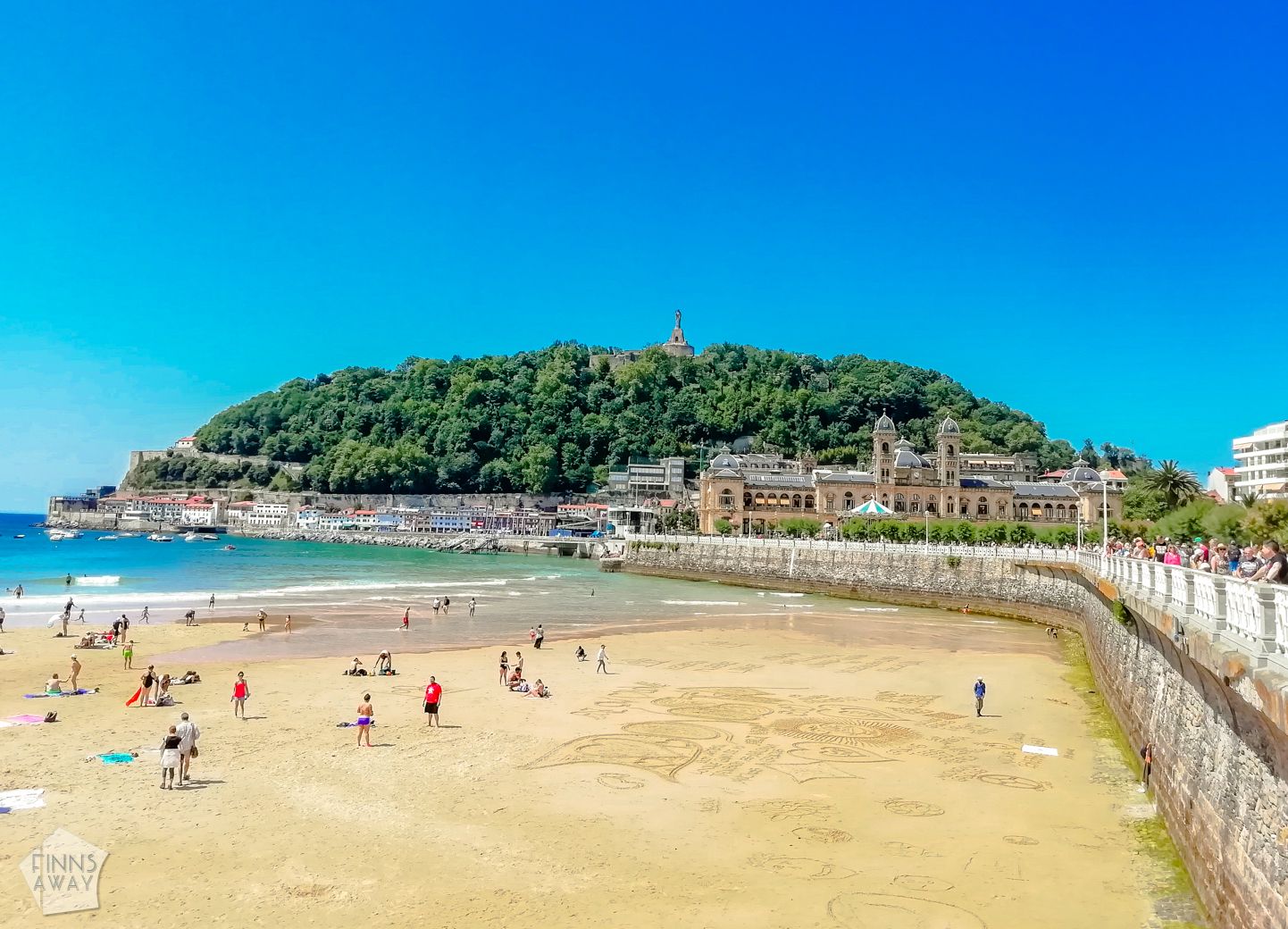 San Sebastian, or Donostia in Basque, beautifully situated by the Bay of Biscay, is a charming, photogenic town that has lured in visitors for a long time. Famous for its beaches, seaside promenade, food culture with several Michelin star restaurants (it’s the city with most Michelin stars for square meter in the world!) and for the lovely old town, San Sebastian surely is worthy of its reputation. We only made a short day trip in the town, but could imagine staying for a bit longer. San Sebastian may not be the most budget-friendly option in the area though, but regarding accommodation there are also some inexpensive options in booking.com. 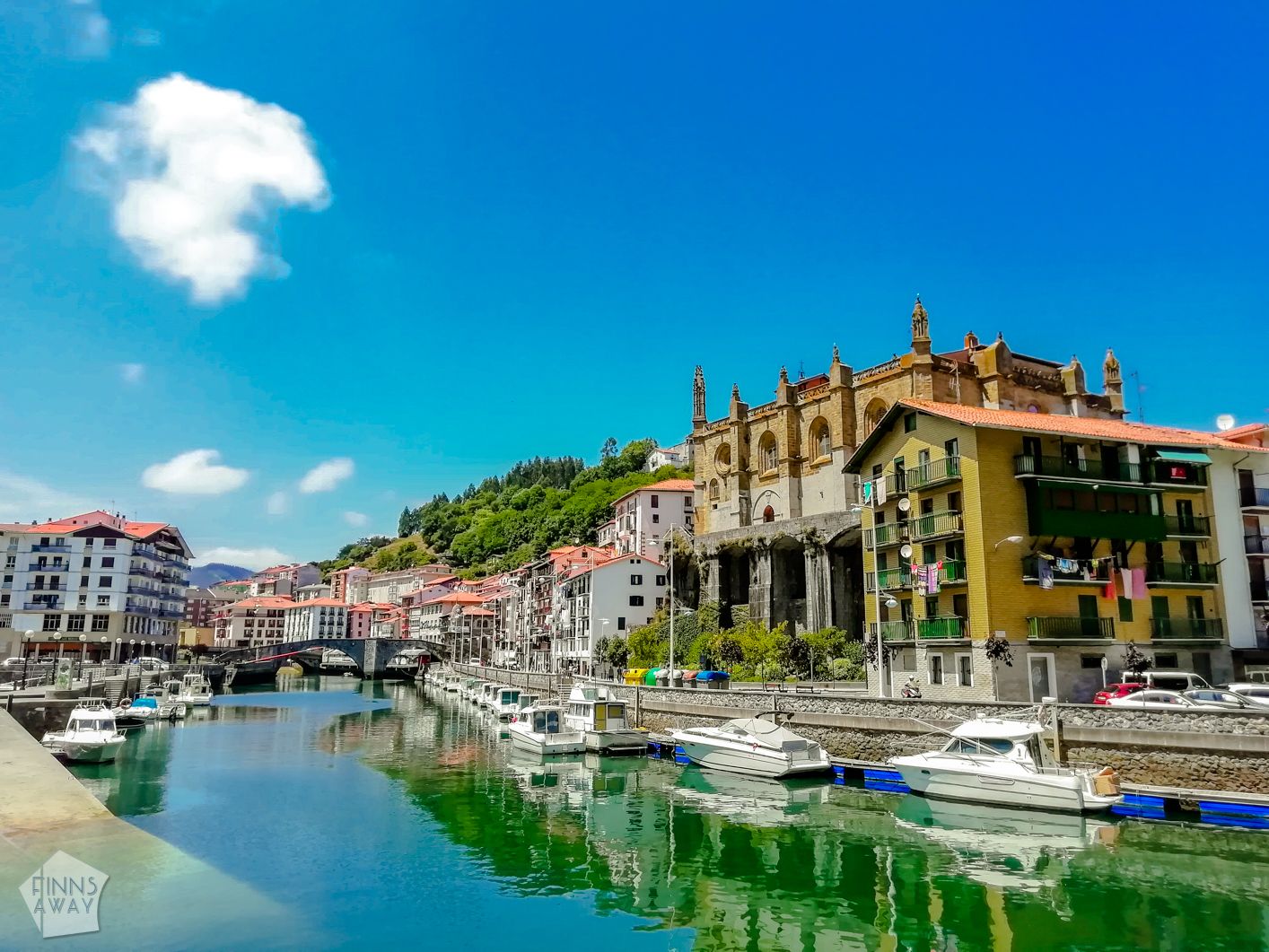 Ondarroa, in the midway from Bilbao to San Sebastian, is another lovely small seaside town, with significantly less tourists than in San Sebastian. The town is beautifully located by Artibay river flowing into a small bay, surrounded with lush green hills. One of the rare sights of this traditional fishermen town is the handsome 15th century Gothic style church Iglesia de Andra Mari. Situated by the river, the church stands on a base that looks like a high stone wall with arches. Right next to the town is a nice beach, and those into camping can choose between several camping sites close to the city and the neighboring Mutriku village. 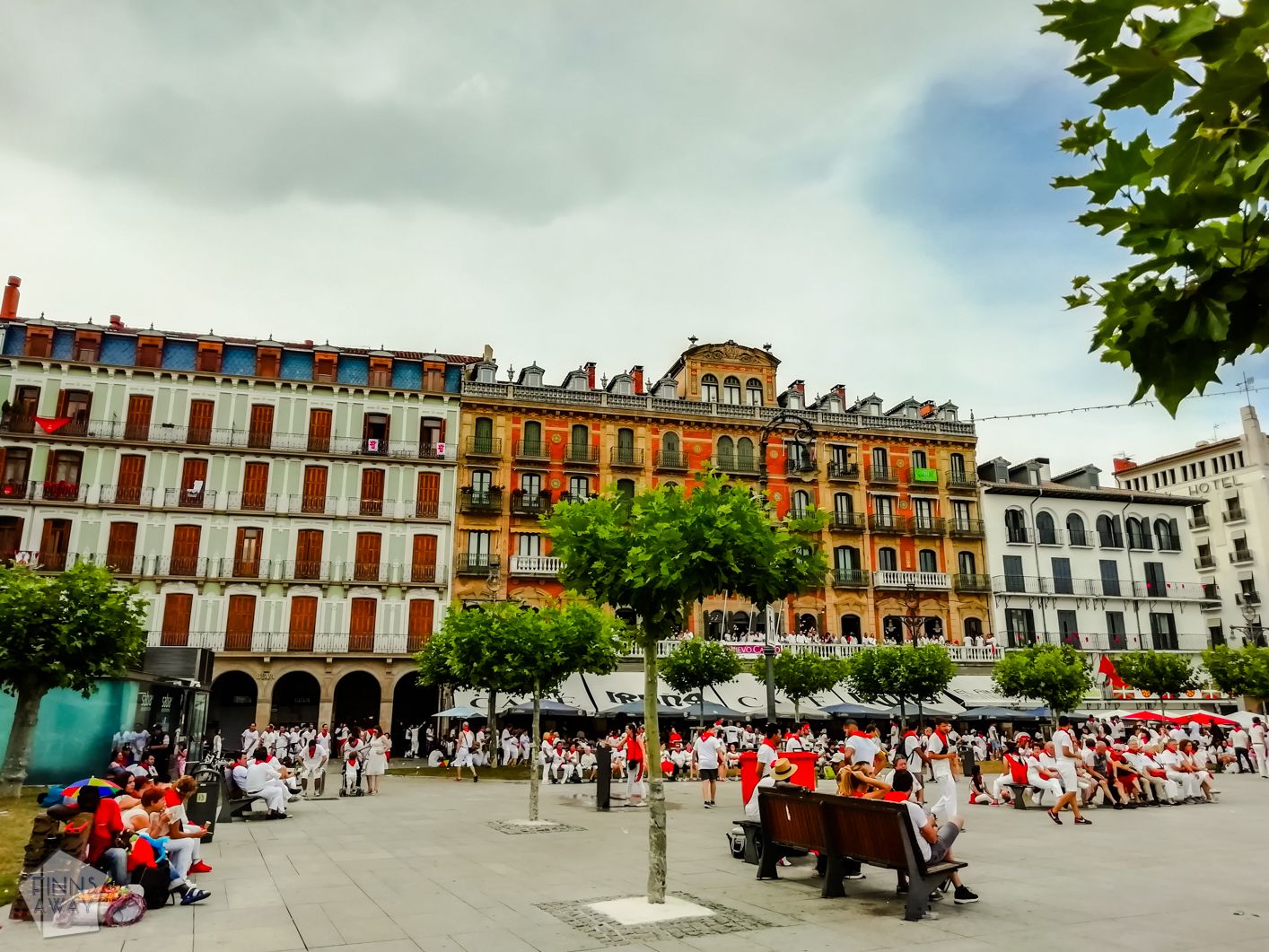 Pampona in Navarre is part of the greater Basque culture region. The city is world-famous for San Fermin festival, especially the running of the bulls that is part of the festival. We happened to be in the region during San Fermin in July 2019, and decided to pay the city a short visit. As expected, the city was full of people, on a very festive mood, and nearly everyone was dressed in white, with a red scarf or belt. The historical city would have been worth of at least a couple of hours of sightseeing, but the San Fermin time is clearly not the best for it, with too big crowds and signs of celebration (read: mess) everywhere.

Saint-Jean-de-Luz in the French Basque Country 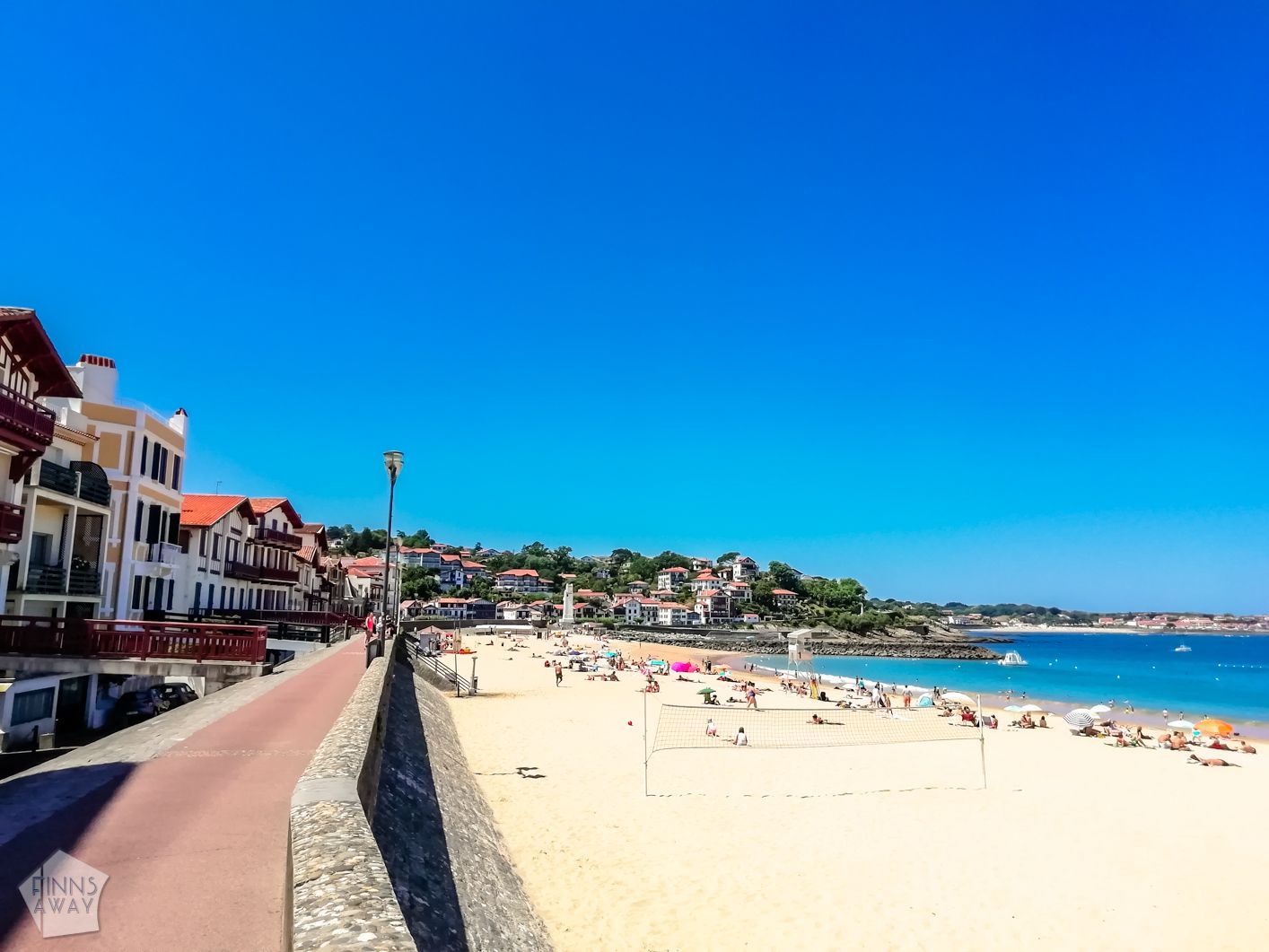 Driving along the coast to the French side of the border, the landscape remains pretty much the same – beautiful nature and small villages with white houses with deep red or deep blue window shutters. The most popular destination of the French Basque Country is Biarriz, a seaside town that has been a popular resort since the early 19th century, but is also a famous surf destination. Worth a visit for sure, but we stopped instead in Saint-Jean-de-Luz, a more quiet but vibrant coastal town with sandy beaches. Saint-Jean-de-Luz is a natural harbor, and has a long history as a port and fishing town. It’s known for a royal wedding of Louis XIV and the Spanish princess Maria Teresa back in 1660, and nowadays the town has grown into a beachside resort town.

Traveling in the Basque Country 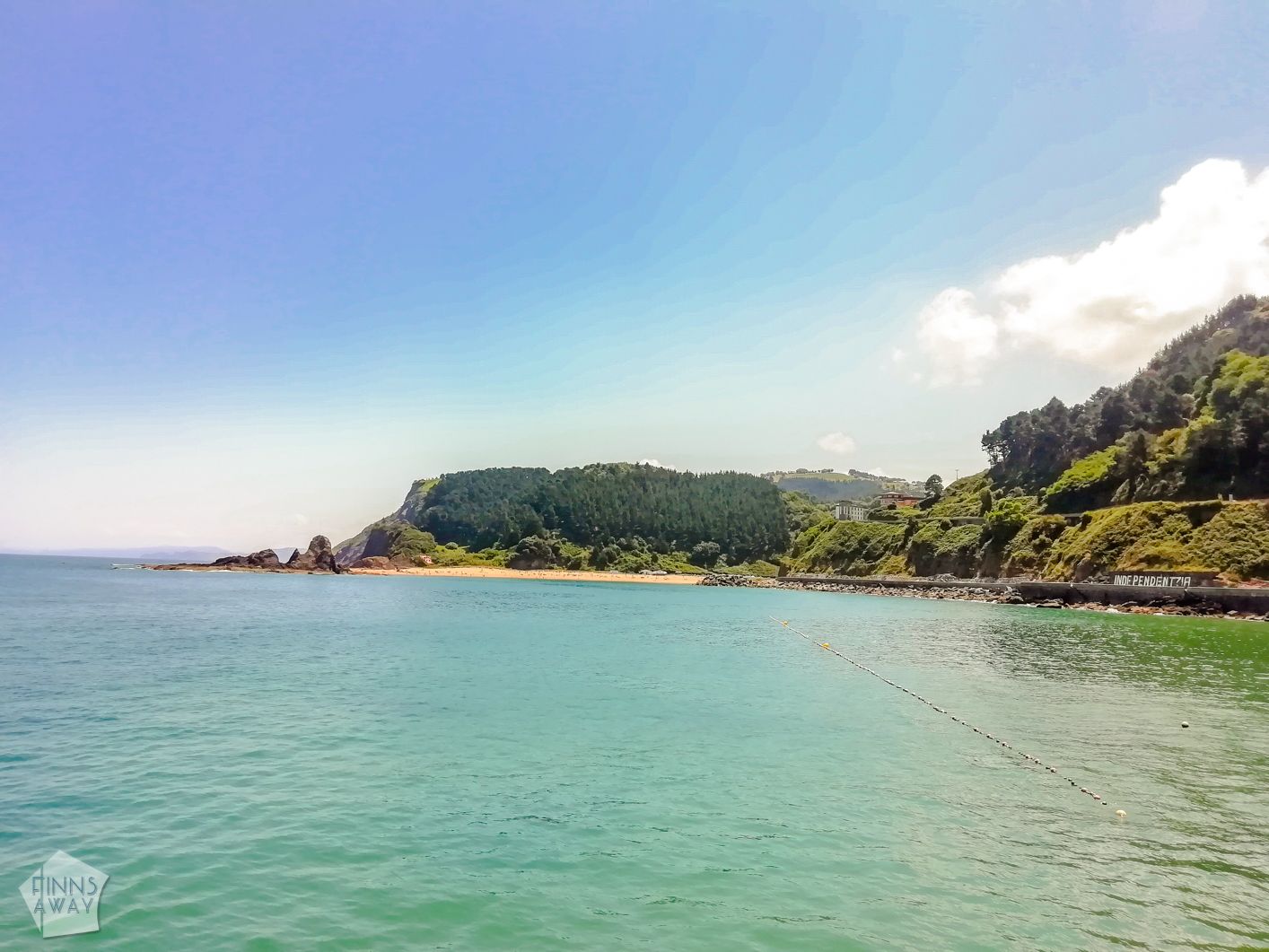 To thoroughly explore and fully enjoy the beauty of the Basque Country, we’d recommend having your own wheels. Public transportation can help to get from town to town, but you’d miss the dramatic coastal views with cliffs, the small scenic roads, the amazingly green forests and the charming small villages. To rent a car, check out AutoEurope, our favorite tool to compare the prices and offers of different rental companies. Another wonderful way of moving around would surely be bicycling! Our visit to this wonderful corner of Europe was too short, and probably we’ll go back some day. It would be great to combine seeing more of the Basque Country to exploring north-west Spain and northern Portugal. 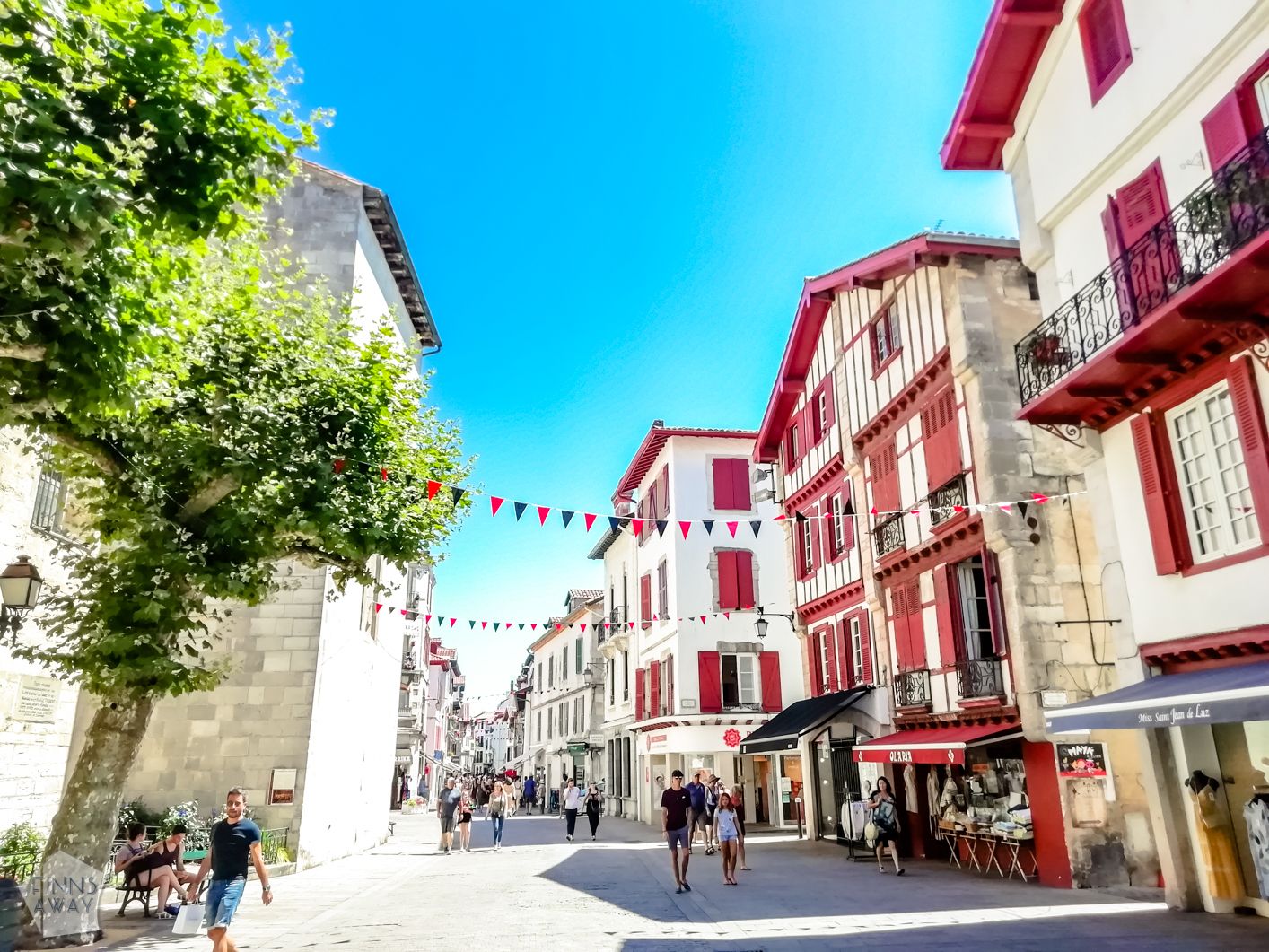 Have you traveled in the Basque Country, or are you planning to? Share your thoughts in comments! 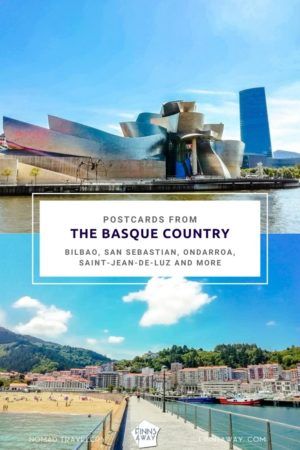