La Cité in Carcassonne, southern France in Languedoc area, is one of the most popular tourist destinations in the whole country, and there are millions of visitors every year. This huge medieval city fortification on a hill outside the present day Carcassonne, is a gorgeous sight that can be seen from afar. With altogether 52 towers, most of them covered with which hat roofs, the citadel looks like from out of a fairy tale, and you could spend hours just wandering around La Cité along the narrow cobbled streets. In this post we shortly introduce the history of the citadel, provide tips for your visit and share picture gallery of La Cité.

History of La Cite in a nutshell 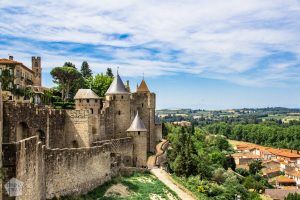 The hill where La Cité proudly stands, has been fortified since prehistorical times, and it has changed hands several times. The citadel was originally built in 12th century, and enlarged in 13th century. La Cité served as the seat of power of the Counts of Carcassonne, as a royal fortress and as a border fortification, as the Spanish border used to be right next to its’ walls. However, when the Roussilon area was merged to French Kingdom after the Peace of the Pyrénées in 1659 and the borderline relocated, the citadel lost importance, and the residents began to move in the lower village called La Ville Basse. La Cité was eventually left to fall into ruin. 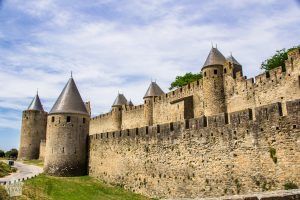 By the 19th century, La Cité had turned into a miserable suburb, a poverty-stricken area outside the wealthy city of Carcassonne, and it almost got demolished. Saving the citadel was a huge project, in which architect Viollet-le-Duc and writer, archaeologist and historian Mérimée played important role, together with historian Jean-Pierre Cros-Mayrevieille from Carcassonne. The whole citadel was restored, and new double walls built over the ruined walls, so that only the lowest parts of the walls are original. The massive restoration works lasted for over 50 years, and brought back the grandeur of the citadel, with some fresh additions, like the famous which hat roofs of the towers. La Cité was inscribed to the list of UNESCO World Heritage Sites in 1997. 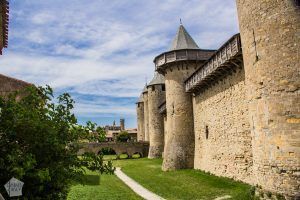 Visitors can enter La Cité for free of charge, and wander around the citadel. Be warned, it really is a popular tourist destination and does get crowded, especially in summer. Along the city streets, there are lines of small shops selling souvenirs and pretty much everything, several restaurants and even hotels. Most of the tourists seemed to stroll on the main streets though, and closer to the walls, and between them, it was much quieter. For those arriving by a car, there is a big parking lot right outside the citadel (with a fee). You can also leave the car further away for free (street side parking in Carcassonne) and walk to the citadel, admiring the majestic for of La Cité, and walk through the cute old town below it.

For many visitors the highlight of the day in La Cité is the Count’s Castle (Château Comtal), surrounded with a secondary moat. Inside the castle walls there are inner courtyards with architecture from different eras and more towers. There is a museum introducing the history of the citadel and the renovation works, as well as the defensive systems. Tickets to the castle are 9 € for adults, 6 € for kids. We didn’t have time to explore the castle, but have read from several sources that it’s well worth the entrance fee.

Most of the visitors come to Carcassonne on a day trip, but consider also staying a little longer. The citadel is illuminated after dark, and for sure a wonderful sight also late in the evening. There are several accommodation options right below the citadel, with great views from the windows and balconies. Prices of the hotels and guesthouses with views seem to start from around 75 € for a double room – check out the options in booking.com!

Tip for those on a road trip; less than 20 kilometers north of Carcassonne is a small village called Lastours, with Chateaux de Lastours castle ruins. The complex of four castles up above the hills over Orbiel river valley is a handsome sight, and the overall landscapes in the valley and hills are beautiful. Campers can stay overnight in affordable Camping de Lastours le Belvedere, where you can have a view to the castles right from your tent! 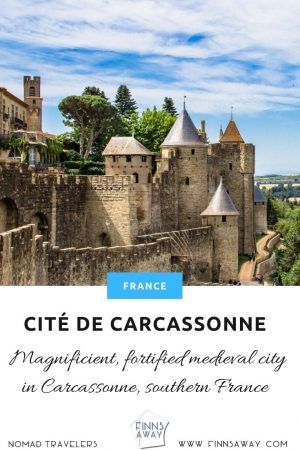