How much does traveling in southeastern Europe cont? Is Greece an expensive country to travel or to live as a nomad? What was the total price of the 5 months road trip through eastern Europe?

This is the fifth post in our post series about monthly costs, opening up the travel expenses in December 2017 and summing up the whole year (5 months of nomad life). In our Finances -page you can find all travel cost posts, and more information and tips for budget traveling.

In December we continued our road trip south in two countries; Albania (19 days) and Greece (12 days). Albania is a much cheaper country to live in than Greece is, and thus our daily consumption increased notably after crossing the border to Greece. But still, it was the second month in a row, when we spent less than 1 000 € per month. This includes all traveling costs from fuel to accommodation, and all food and drinks for two people. Divided to daily level, we spent altogether 32 € per day, so 16 € per person per day. This daily budget again demonstrates, that it indeed is very affordable to live in the Balkans. 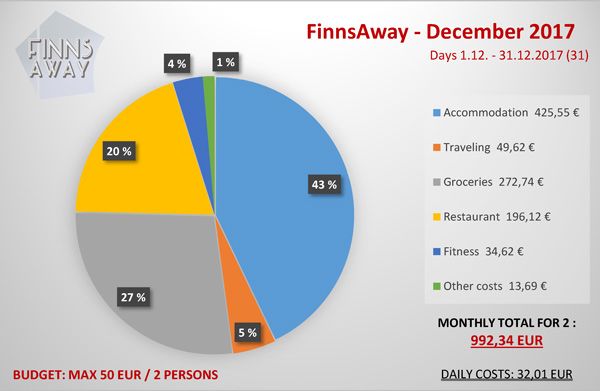 The categorized cost chart looks pretty similar with the one from November. Accommodation costs are the biggest category, 426 € per month, which is a bit under 14 € per night. Taking into account that this includes three hotel nights in Kalabaka (36 € per night), it’s not bad at all. Other accommodations were once again apartments, rented via Airbnb and Booking.com. All the apartments both in Albania and Greece have been of excellent value for money.

In December we ate out less than before, and thus the cost category for groceries was bigger than the one for restaurants. We used altogether 469 € for food and drinks, out of which 196 € in restaurants. Eating out was really affordable in Albania, and when moving to Greece after that, all the prices suddenly seemed pretty high. Fast food, like pita kebab or falafel, is pretty cheap, but dining in decent restaurants is much more expensive than in Albania. Still, you can get nice dinner (main course) for two, with some wine, for less than 20 euros. In Albania a similar dinner in restaurant usually cost around 12 euros.

We spent in total 273 euros for groceries, so around 9 € per day. This includes all food supplies and drinks bought from supermarkets and street market stalls. Most of the basic groceries are much more expensive in Greece than they were in Albania. We have bought a lot of vegetables and fruits from street markets, where they are cheaper than in supermarkets and super-fresh. We cooked most of the meals ourselves, which really helps to keep the overall consumption on low level.

Traveling costs in December were only 50 euros, nothing else there but fuel, since we have been moving by our own car. Diesel price in Albania was 1,2 €/l and around 1,3 €/l in Greece. Fitness costs are the entry fees to gyms, 35 € altogether (usually around 3 euros per entry, sometimes we have managed to get free entrances also). In the category other costs (14 €), are entrance fees to Butrint archaeological site in Albania and buying a new moka pot for making better coffee (we are not big fans of instant or Turkish coffee).

To build a picture of the total cost of our journey so far, from beginning of August until end of the year, we summed up all months and added some fixed costs on top. Before leaving Finland behind, we set a daily budget target of 50 € for two of us. That should include everything, also the flights and insurances in longer run. So how have we managed to keep that so far? First of all, let’s take a look at the monthly total consumption, that shows that first months were the most expensive ones.

As you can see, there is remarkable difference between the first two months and the last three. This is partly because the countries that we visited in the end of the year, especially Albania, are very affordable to travel and live in. Another reason is that our traveling pace has slowed down a lot. During first two months we rarely stayed in one place longer than few days, and drove a lot, visiting eight different countries. When traveling with such speed, accommodation is often more expensive (longer stays are cheaper) and you have to eat out more often (not possible or at least easy to cook when on the road). Third reason is that we simply spent more money to unnecessary things, like quality craft beer, in the beginning of the adventure. Seems that we are quite stingy nowadays :).

Monthly consumption sums up to 6149 € for two in five months, which is on average 41 € per day, so 20,5 € per person per day. But then we need to still add some fixed costs that haven’t been calculated in our monthly summaries so far. We don’t have a longer term travel insurance yet, so we have paid only for the basic insurance that we had in Finland (this insurance is not valid for longer stays abroad, so we will have to take new, and probably much more expensive, insurance soon). 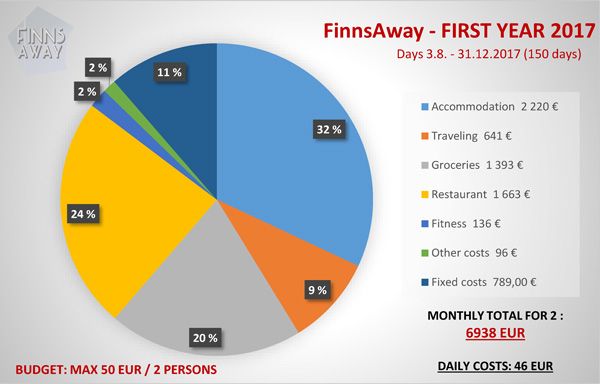 All these fixed costs together make 789 €, which means that the total price for five months on the road was 6 938 € for us two, which is on average 1 388 € per month and 46 € per day (23 € per person per day). In the cost graph you can see how the costs split between different categories.

We have managed to maintain our daily budget so far, and even managed to stay under it in 2017. But then again, we mostly traveled in low-cost countries, and didn’t fly at all. Also, in coming years we will have to pay more for travel insurances. So let’s see how big challenge this 50 € per day target will be in a long run!

However, we would say that this summary proves that you don’t need to have huge savings for traveling, even for several months. All depends on the choices you make, both home before starting your journey, and when on the road.

How does this price tag, under 3 500 € per person for five months road trip in Europe sound to you? Leave a comment below!