How cheap it is to travel in the Balkans? Can you really rent a whole apartment for 10 euros per night? 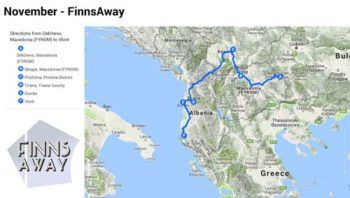 November was the cheapest month of our new nomad life so far. We stayed in three countries; Macedonia (14 days), Kosovo (2 days) and Albania (14 days). Traveling in these Balkan countries is inexpensive, especially Albania has been really affordable so far. Total costs for the whole month were just under 1000 €, which is around 33 euros per day for two of us, 16,6 € per person per day. Not bad at all, or how do you see?

The main reason behind the decreasing cost level is the change in our traveling style. We have now been more than 100 days on the road, and no longer living like we were on holiday, but adjusting to life as nomads. Our traveling pace is much slower than before, and we are often staying at least one week in one location. Comparing to the first months on the road, when we were moving quickly and were still more on a holiday mode, we now use much less money in restaurants and grocery stores. We haven’t categorized alcohol costs separately, but for sure we spent much more on craft beers and wine in the beginning of this adventure.

Accommodation costs stayed on the same level than in October. We have stayed longer periods in one place and mostly lived in apartments, which suits us perfectly. Having own kitchen and space for working is important, as well as the peace and quietness compared to hostels for example. The apartments have been pretty new, clean and very well equipped but still really affordable; we have paid in average 13,6 € per night for apartments in November. The most expensive accommodation of the month was, quite surprisingly, the shabby hostel we had in Kosovo for 20 euros per night… So, we can warmly recommend renting an apartment instead of staying in hostels, at least if you are traveling slowly or want to work aside. We have mostly found the apartment deals from Airbnb but there often are good options also in booking.com. 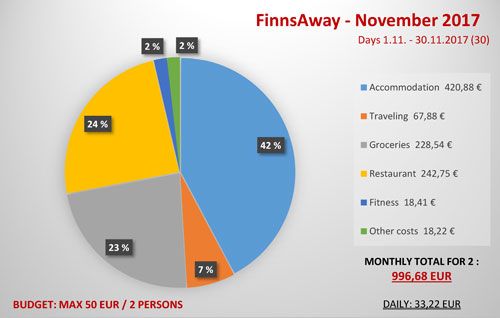 Here is the chart showing the exact costs divided in categories. After accommodation costs, the biggest expense category was eating out. We spent altogether 243 euros in restaurants during the month, including all drinks. Dinner for two with carafe of local wine in a beachfront restaurant in Albania can cost less than 15 euros, with steak as main course maybe few euros more.

Groceries category sums up to 229 €, so we used 7,6 euros per day in shops, including all food supplies, drinks and consumer goods like shampoo and washing powder. Here in Albania you often can’t find a vegetable and fruit department inside the supermarkets, but stalls full of fresh products outside the shops instead. Veggies are also sold in lively street markets, and locally produced goods are cheap and of good quality.

Traveling costs from November are fuel plus the green card insurance for Kosovo (15 €), totally only 68 €. We drove altogether 666 (yes, exactly that much…) kilometers through Macedonia and to Albanian coast via Pristina and Tirana. Fuel was quite inexpensive in all these countries, especially in Macedonia, where diesel cost less than 90 cents per liter. In Albania the price is around 1,2 €/liter at the moment, and gasoline price is about the same.

Regarding other costs, we used 18 euros for clothing (new sneakers for Toni) and 19 euros for fitness, meaning entrance fees to gyms. One single entry to gym usually costs around 3 euros here in Balkans.

Compared to our home country Finland, 500 € in a month is not much. It could barely cover the rent for a small apartment, but not much else really. On the other hand, we are not anymore comparing our previous life to the one that we are living now, as pretty much everything has changed. With no regular wage income you need to think about the expenses quite differently, and with basically unlimited time in use, traveling doesn’t mean the same than it used to.

Would you be able to live or travel with less than 500 € per month? Or compared to living in your home country, how do you see this monthly price tag?