Our second destination in Honduras was the town of Copan Ruinas, and the nearby ruins of Ancient Copán. Copan Ruinas is situated in western Honduras, very close to Guatemalan border. Copán Mayan ruins is one of the most visited tourist destinations in Honduras. This means that you probably won’t be able to explore the ruins all alone anymore, but it also means that Copan Ruinas has grown to a town that can offer everything that visitors need, from comfy accommodation options to different kind of restaurants and from interesting day trip destinations to craft beer. Still, Copán, as well as Honduras in general, sees only a fraction of the visitors of the most popular destinations of Central America. 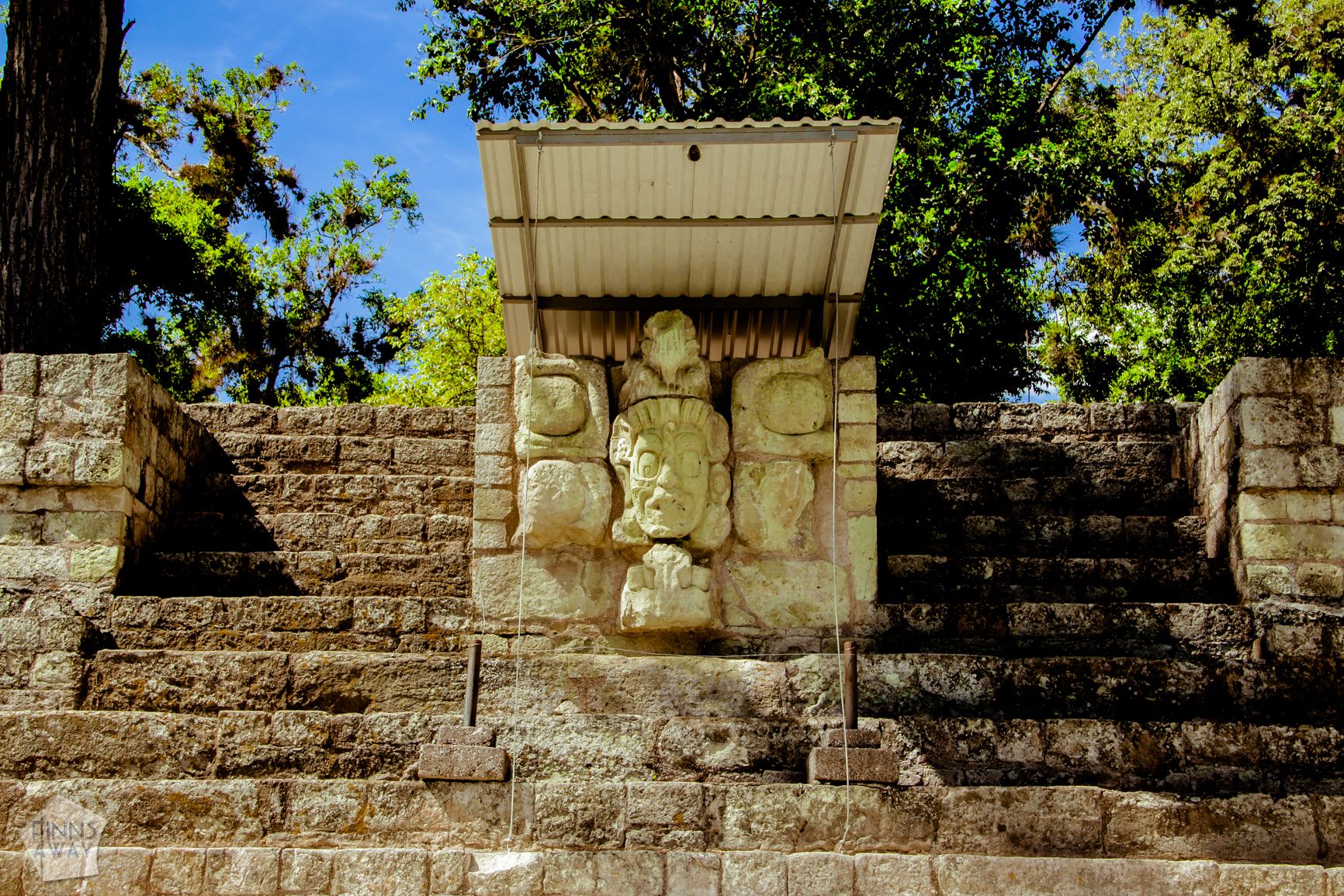 Copán was the capital city of a major Mayan kingdom from 5th to 9th centuries. It was  a political, religious and civil center of the Mayan civilizations in the area. The well-reconstructed ruins are known for their distinctive sculptural style, a hieroglyphic staircase and tall sculpted stone pillars called stelae, as well as for overlapping step pyramids and large plazas. These ruins are not particularly large in scale, but very rich in details, and you can see detailed carvings everywhere.

Copán was occupied over 1000 years in total, maybe even as long as 2 000 years, but most of the remaining ruins date back to time between 400 and 800 AD. When the city was as its greatest, it was inhabited by around 25 000 people. Local people have been aware of the ruins for a long time, but excavations in the area didn’t really begin until 1975, and it’s still an active archaeological site. Copán was added to the list of UNESCO World Heritage sites on 1980.

Copán is a quite large site to explore, and the entire site includes over 4 500 structures. The main area, called Principal Group, covers roughly 2 square kilometrers, and then there is another, separate area, called Las Sepulturas, roughly 1,5 km walk from the main site. The big temples and squares are in the Principal Group, close to the entrance of the site. In this area you’ll also find the underground tunnels and a lot of sculptures. It’s allowed for visitors to climb on top of part of the temples, and from up there, it’s easier to see the layout of the area. There are also a lot of smaller ruins still covered by the forest outside the main areas. You could head to the nature trails to explore more, but there is not much to see in the woods really, except for beautiful trees, butterflies and flowers. 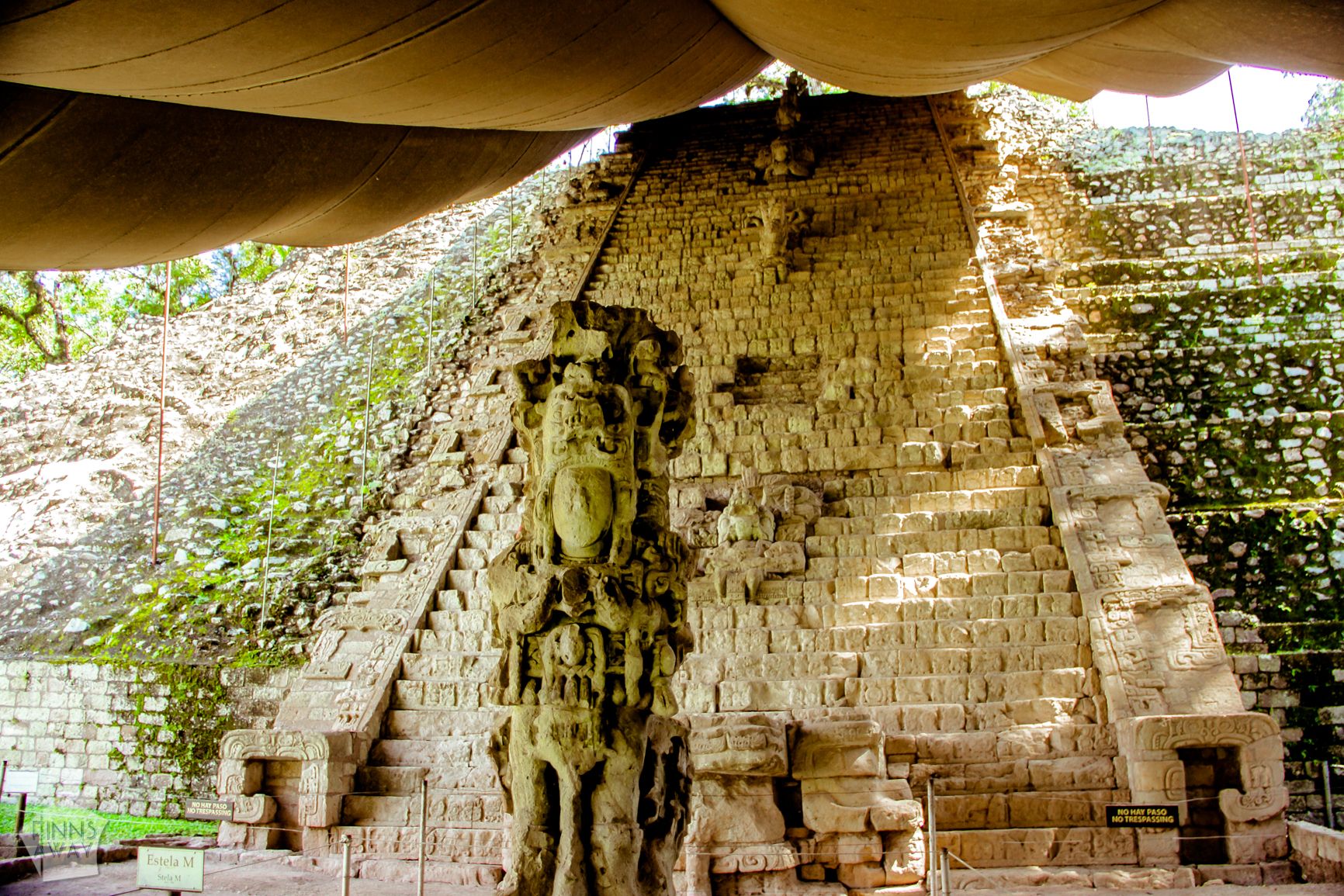 When exploring the Principal Group, take some time to explore the stelae, as well as the carvings in the structures. Also, be sure to stop to admire the covered Hieroglyphic Stairway, that is the most famous monument in Copán. The hieroglyphs form the longest discovered Mayan text anywhere, and consists of approximately 2 000 glyphs. Under the ruins there is a network of tunnels, and some short sections are open to public, but not included in the basic entrance fee. We didn’t enter the tunnels, and have seen both good and bad reviews of them – if you are interested to see some remains of buried pyramids and ancient tombs and don’t mind paying another 15 USD, consider including the tunnels in your visit.

In addition to admiring the ruins, a visit to Copan archaeological site is rewarded with watching a flock of beautiful scarlet macaws, that are fed and taken care of in the area. Apparently at least part of the macaws in Copan are descendants of two macaws that the government of Honduras donated to the park, with a hope that macaws would once again thrive in this area and fly over the ruins of Copán as they used to. The birds are fed near the entrance of the archaeological park, and even though you should not go too near or disturb the birds of course, these macaws are used to being close to people and don’t seem to mind being photographed. If you are lucky, it’s also possible to see monkeys and even sloths when exploring the ruins, and there are a lot of other birds and parrots in addition to scarlet macaws. 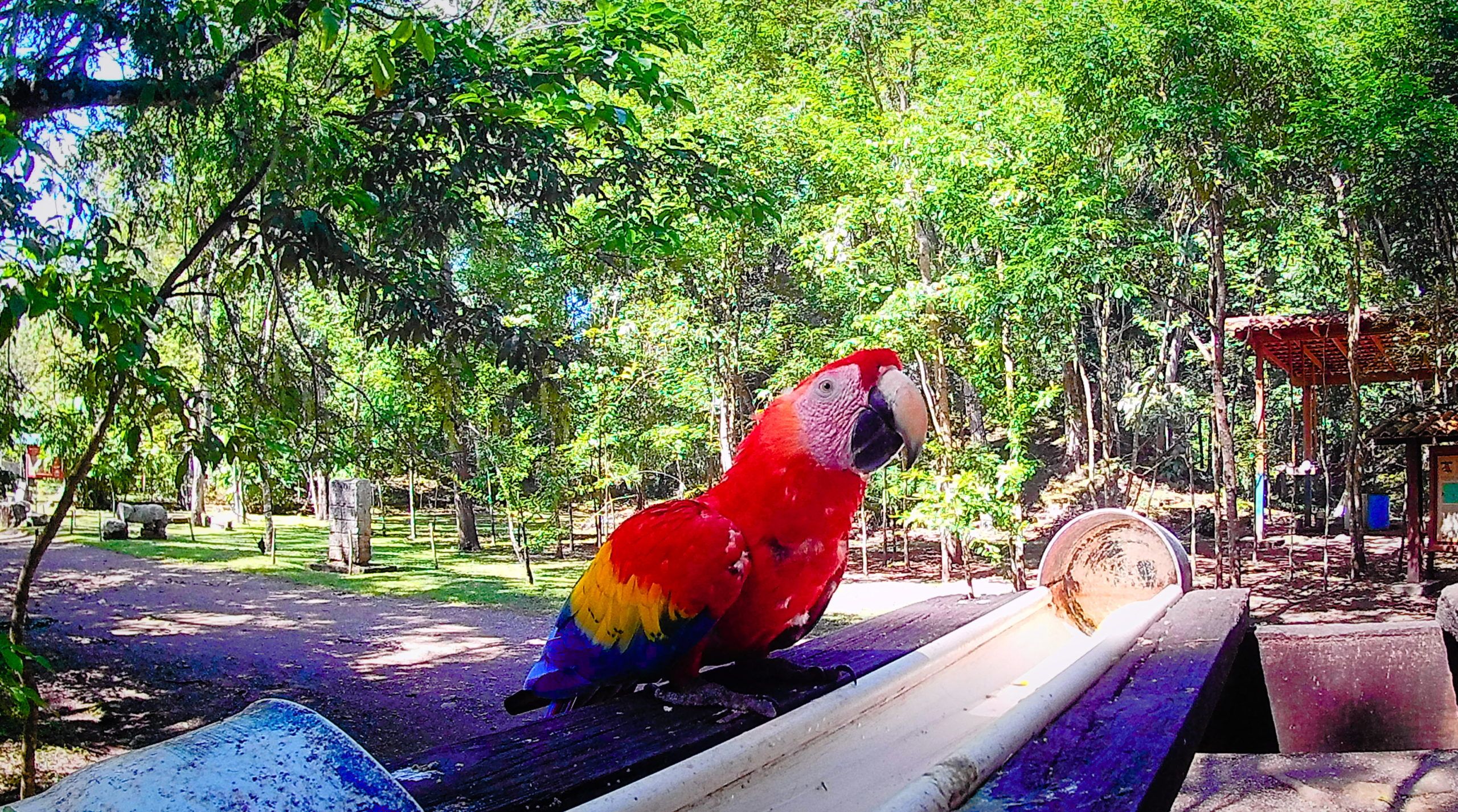 Copan Ruinas is a charming small town, with cobblestone streets climbing up the hill on which the town is built. Due to the famous ruins, the city has grown to a welcoming tourist destination with plenty of accommodation options and restaurants. Still, it’s rather authentic, as you really don’t have to wander far away from the central square to be in the middle of local life. The main attractions of the town are centered around the main square. There you’ll also find Museo de Arqueologia Maya, a small museum focused on artifacts collected from Copán ruins (tickets for foreigners 3 $).

The surrounding nature in Copan Valley is very lush and beautiful, and Copan is a great destination for a few days stay. After spending one day in the ruins, you could head to explore the valley either on foot, on a horse-back tour, or by hiring a tuk-tuk driver or a tour guide. Tourist attractions close to Copan Ruinas include for example Macaw Mountain Bird Park, that is a sanctuary to endangered and rescued birds, Luna Jaguar Hot Springs, that is often referred as the spa of Copan, and Finca Santa Isabel Coffee Farm. We had limited time in Copán and skipped these sights, but made a run on the dirt roads above the town instead. The climb up was rewarded with lovely views over the valley. 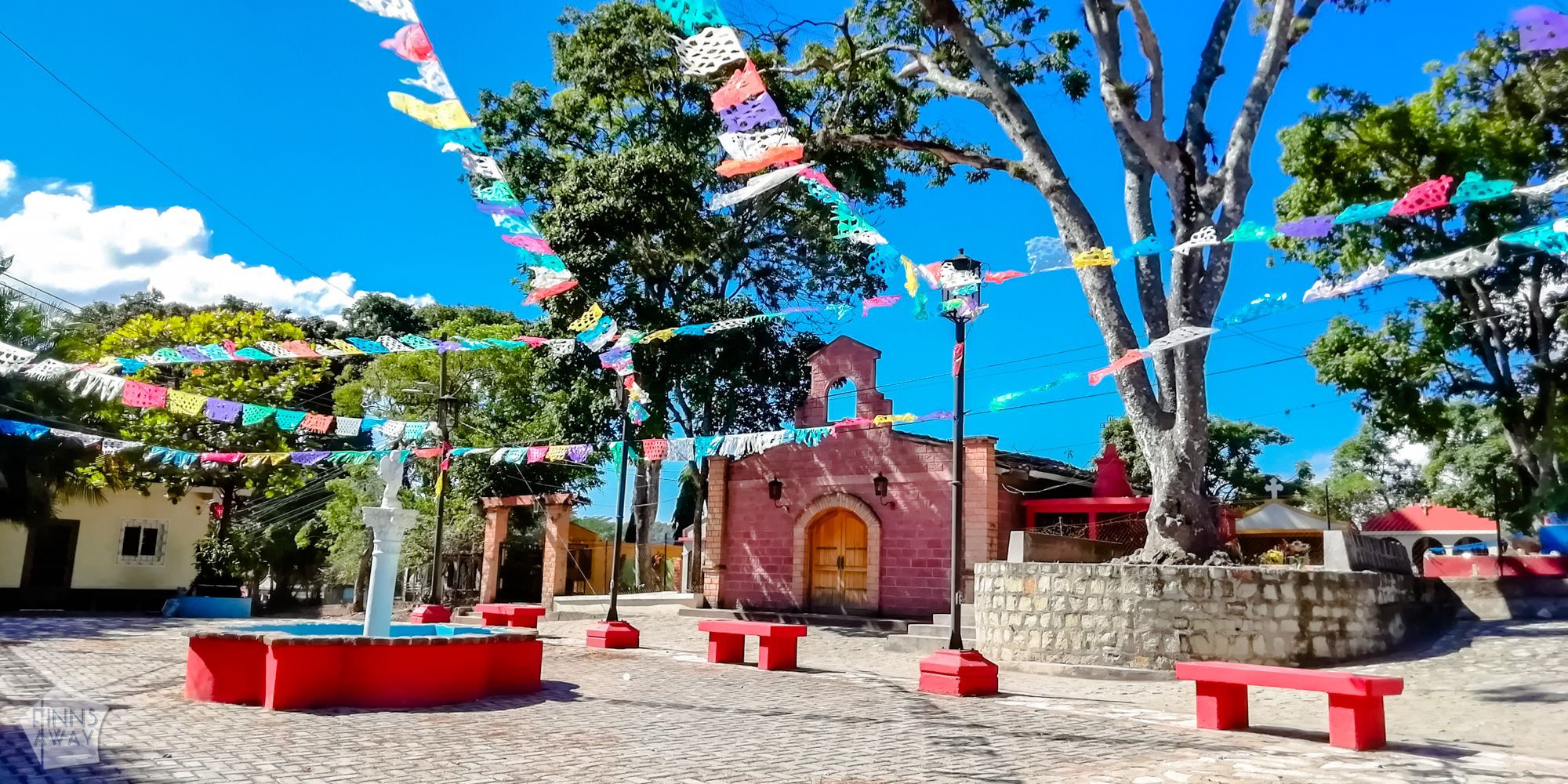 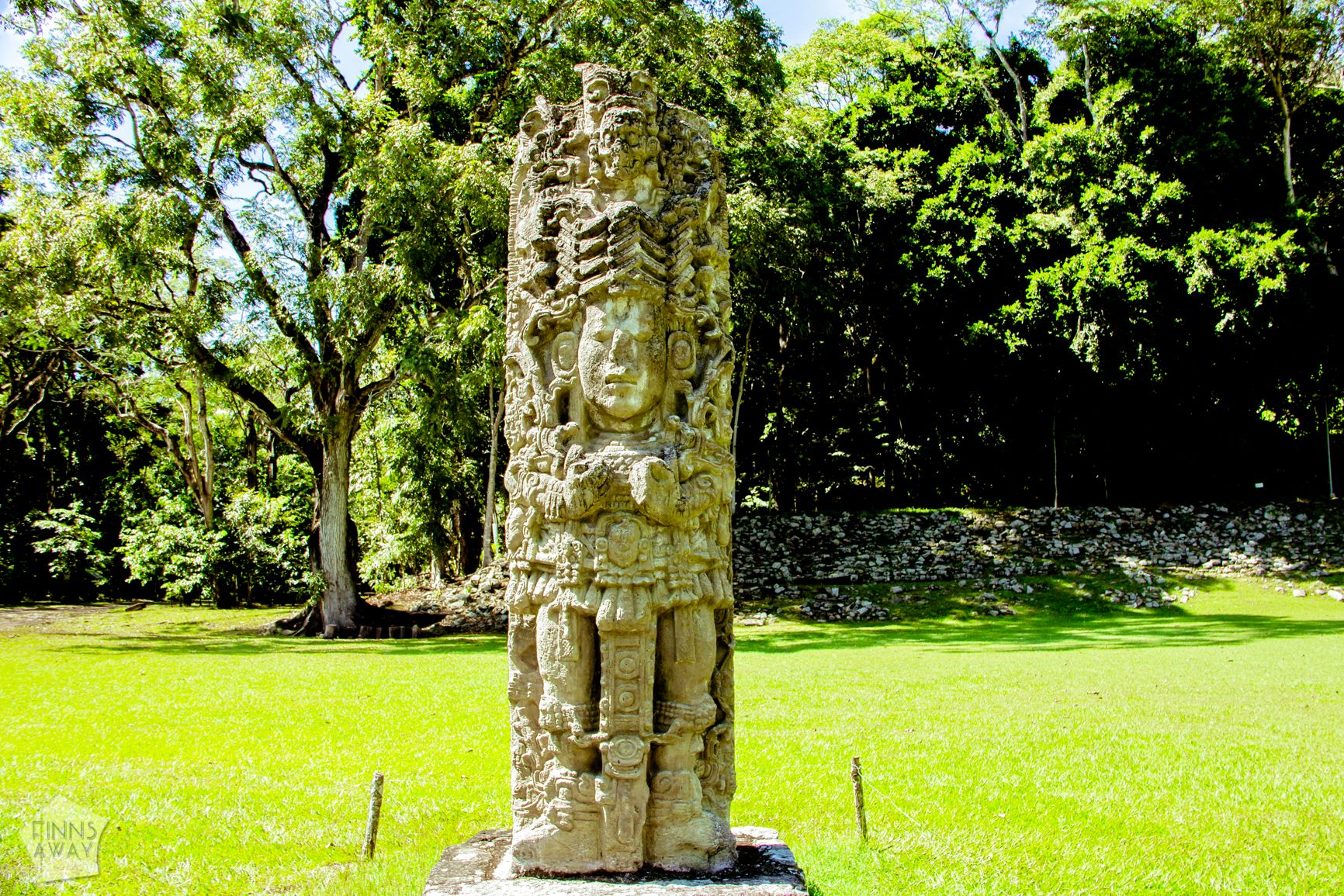 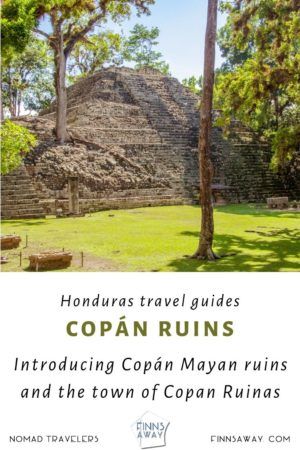 More posts about Central America
Our resources
and Discounts

2 thoughts on “Mayan ruins and macaws in Copan, Honduras”