We drove along the stunning coast of southern Albania in December 2017, admiring the picture-perfect scenery. The beaches are empty during the winter, but it’s easy to see why the summer months bring more and more visitors to this part of the Balkans.

If you ever travel to Albania, don’t miss out the southern part of the country. As already described in the post about Vlorë, this area is sparsely populated and not much visited, and thus one of the most unspoiled corners of the Western Balkans. Southern Albanian coastline, where the mountainous landscapes meet the blue waters of the Ionian Sea, is just amazing. On top of that, South Albania surely is a paradise for adventurous hikers. We haven’t yet been up in the mountains though, and may need to postpone hiking there until warmer months.

The secret is out: Albania is the next hot beach holiday destination

The amount of international tourists heading to the beaches of southern Albania is increasing quickly, so go before it’s too late! Already now several travel agencies organize package holidays to bigger beach towns, so those can get crowded during the peak season in summer, especially in August. That is why we would recommend visiting coastal Albania from May to early July or from September to October, when it is warm and sunny, but not that busy. You could find an isolated beach just for yourself, and even the most popular beaches are not fully packed. The winter months are also suitable for visiting Albania, but it’s too chilly for sunbathing, and the mountain areas get covered with snow.

To get the most out of the beauty of the coast, we recommend making a road trip south from Vlorë to Sarandë and Ksamil near the border of Greece. Having your own wheels enables stopping to admire all the little beaches and villages whenever you want, but there also are some options to make the trip by public transportation, meaning buses and furgons (mini-vans). Another amazing option would be to cycle through the coastal area.

The road south from Vlorë quickly starts to climb up the slopes of the Ceraunian (or Llogaran) Mountains. There are some exciting hairpin turns, but the road is in good condition and safe to drive. At the time of our road trip there wasn’t much traffic on the coastal road, but we needed to stop couple off times due to cows and goats. There even was a huge pig walking along the road alone, no idea where it was coming or going…

Llogara pass: touching the clouds and views over the coast line 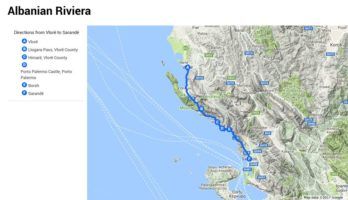 The highest point of the coastal road is called Llogara pass, over 1 000 meters above the sea level. Views from up there are beautiful, so it’s recommended to utilize the parking lot and take some pictures while admiring the scenery. Apparently also at least part of the buses driving the coastal route make a stop there before continuing down the other side. There are some accommodation options as well, so Llogara pass is an option for a longer stay, if you want to escape the hot beach areas and get some fresh air. Llogara National Park with rich fauna offers some options for hiking, and Aeroclub Albania organizes paragliding off the mountain ridge down to the sea level.

When driving south from Llogara pass, the road winds past small villages and slopes full of olive groves and citrus trees. In between the rocky cliffs lay dozens of small sandy bays, and local houses are built on sunny hillsides. The smaller beaches are still quite isolated with not more than some small resorts, restaurants and camping areas, but the bigger ones have grown to full service tourist villages. The coast line between Palase and Lukove is called the Albanian riviera, and it’s full of life in summer. Outside the season, when most of the services close down, you could still have a quiet beach only for yourself.

The first beach after driving south and down from the pass, is 1 km long Palase, followed by Drymades and Dhermi beaches, that are filled with trendy beach clubs in summer. Further south is small Gjipe beach and then more popular Jali and Livadhi beaches. Between these bigger and easily accessible beaches there are some tiny ones that can be reached only by boat, so if you are looking for a secret getaway, finding one of those might be the best option! Villages above the sandy bays are small and picturesque, with some castle ruins, monasteries and old churches worth visiting. So if you are making a road trip through the area, allow some time to explore the hill side villages and surroundings as well.

Continuing south, you will arrive to the town of Himarë. The sleepy town consists of two separate areas, the old town up on the hill, with ruins of Himara fortress, and the coastal part, fishing village called Spilea. There are two beach areas and a wide selection of accommodation options and restaurants in the town, and during the summer there is a boat connection to Corfu island. The small Llaman beach just 2 km south from the town makes a popular day trip from Himarë.

From Porto Palermo to Sarande

Porto Palermo further south from Himarë is most famous for the picturesque Porto Palermo Castle, that is gorgeously located on a peninsula, connected to mainland only by a narrow strip of land. The next small village is Qeparo, and after that you will reach the village of Borsh with the longest beach of Ionian sea. This is said to be the warmest spot of Albania, and enjoys close to 300 sunny days a year. Before reaching the town of Sarandë, there are still couple of small villages and beaches, and the road loops behind the mountains before getting down to the coast again.

Sarandë is the southernmost town in Albania, and only about 12 km from the Greek island of Corfu. That makes it another popular entry point to South Albania together with Vlorë in the north side of Albanian riviera. Many international tourists fly to Corfu and take a boat from there to the port of Sarandë. The city is spread along a horseshoe-shaped bay and the hillsides above it.

There is a nice promenade with small Greek tavern style restaurants along it. Hotels seem to be everywhere, and there are lot of apartments for rent as well. Seems that the city has grown a lot during past few years, and even more new hotels are under construction. Beaches in the town may not be the best in Albania, but Sarandë is a nice option for a base to explore the nearby attractions on day trips. 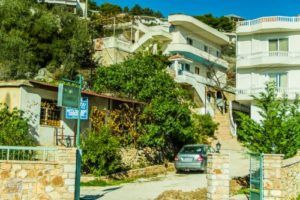 We stayed one week in Sarandë, in a lovely two-room Apartment Dejvi, hosted by a friendly family living upstairs. The apartment is located a bit out of the center, so it’s peaceful and quiet, but still well within walking distance of the beach boulevard and restaurants. When not working, we enjoyed the beautiful views of the bay of Sarandë, walked along the empty beaches and exercised in a gym.

Besides the beautiful scenery, more and more tourists love coastal Albania due to the very affordable price level. In the most popular tourist hot spots the prices for sure have raised, and there is a peak at least in accommodation rates during the summer season. But still, Albania is very budget-friendly destination. In December we got own apartments for rent with just about 10 euros per night and a lunch in a tavern by the beach in Himarë cost around 4 euros. Half liter of local lager beer costs 0,60 € in grocery stores and starting from 1,10 € in restaurants.

For searching accommodation, we once again recommend booking.com and Airbnb. We have found excellent apartments in Albania through these services. If you prefer hotels or hostels, there are plenty of them available via booking.com as well. For finding the best flight deals to Albania or Corfu island, check the options through SkyScanner.