Southern Albania is simply amazing. Being relatively sparsely populated and not much visited, this corner of the Western Balkans is still mostly pristine and unspoiled. In South Albania the snow-capped mountains and green valleys meet the blue waters of the Ionian Sea, small villages spread on the slopes together with olive groves and trees heavy with citrus. Shoreline is filled with rocky cliffs, sandy bays and small towns and villages here and there.

The city of Vlorë is an easy entry point to the coast of southern Albania. It is situated some 120 km south from Durrës and Tirana and can be easily reached by train or bus from those cities. Another options to get to South Albania include taking a ferry from Brindisi in Italy to Vlorë or Sarandë, or from the Greek island of Corfu, which is close to Albanian coast, to Sarandë.

We drove to Vlorë after spending few days in Durrës. The road was partly  a motorway, and it looked like it will be extended to cover all way from Durrës to Vlorë in the near future. Vlorë is located at the foot of Ceraunian Mountains and on the shores of the Bay of Vlorë, that opens to the Mediterranean Sea at the point where Adriatic and Ionian seas meet.

The city itself is the third largest in Albania, with population of around 80 000. It was originally founded as an ancient Greek colony and most famous for being the place where Albanian independence was proclaimed in 1912. Vlorë also was a capital city of the country for a short period, and is home to Albania’s second largest port. With almost 300 sunny days a year, Vlorë has been seen as the best hope for developing tourism in the country, and surely has great potential to receive more international guests.

During past few years Vlorë has seen a huge boom of construction. The waterfront project has brought a brand new, wide beach boulevard with three lined walkaways, planted palms, playing fields and sitting areas. Along the boulevard rises long line of shiny new apartment buildings and hotels with commercial space on the street level. The amount of restaurants, cafes and pubs is astonishing, and most of them seemed to keep their doors open even in December, when there surely aren’t much tourists around.

Sights in and around Vlore

The main sights in Vlorë are the main plaza called Flag’s Square, the massive Independence Monument and the Muradie Mosque. For those who are interested in history, there are also some decent museums in the city center, like the Independence Museum and History Museum. The beachfront south from the port is a sight as itself, and a nice setting for walking or running.

Outside of the city, in the village of Kaninë on the side of Shushica Mountain, lies the Kaninë Castle from 3rd century. The castle was later fortified and remodeled over the centuries by Romans, Byzantines, Normans and Ottomans. The ruins of the castle are worth a visit, and offer beautiful views over the city and the Bay of Vlorë. Kaninë can be reached by road from the center of Flora, or from the beach along paths going over the hills. There were no marked trails, but at least with GPS it was easy job to find the way through olive groves and hillsides. If planning to follow the paths, wear proper hiking boots and be aware of the irritatingly prickly plants growing next the the paths.

Narta Lagoon to the north of Vlorë is an important bird and plant area. The lagoon supports significant amount of water bird species like flamingos and pelicans. A wooden footbridge connects mainland to the small, pine covered Zwërnec Island with a well preserved 13th to 14th century Byzantine Zvërnec Monastery. Follow the paths starting from behind the monastery to walk around the peaceful island.

The amount of accommodation in Vlorë is huge nowadays, from luxury hotels to simple dorm beds. There are delightfully much apartments for rent also, either for few days or for longer stay. Booking.com has great variety of options, so does Airbnb. We picked Seaview Apartment from Airbnb, and really enjoyed our stay right next to the beachfront. Check out a separate recommendation post about it!

For runners and trekkers Vlorë area offers plenty of possibilities from easy strolls on the beach to challenging yourself by running up and down the steep hills. 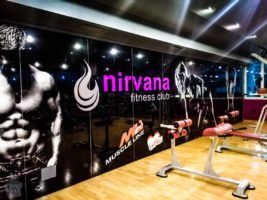 For those keen on going to gym, we recommend Nirvana Fitness Club, that is conveniently situated in the city center along the Boulevard Ismail Qemal. The exercise area is not huge but has nice selection of basic gym equipment and free weights. Dressing rooms with lockers are clean and modern. At the time of our visit, single entry cost 500 LEK, which is a around 3,5 euros.

Guiding your travels
in East Europe