Tulum is one of the quickly developing holiday destinations of Riviera Maya, the beautiful beach strip by the Caribbean Sea in the east coast of Yucatán Peninsula, Mexico. Situated just around 65 km southwest from famous Playa del Carmen, Tulum has grown from a small village to full-blooded, though still quite easy-going, beach holiday destination. The draw here, besides the perfect beaches of course, are the stunning Mayan ruins of Tulum, remains of a Mayan port city built right on coastal cliffs above the turquoise waters of the Caribbean. In this post we shortly introduce Tulum and the ruins of ancient Tulum, and provide tips on how to visit the ruins. 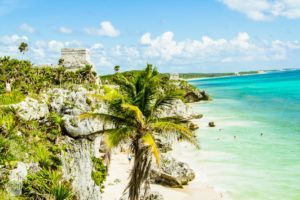 Ancient Tulum was one of the newer Mayan cities, and one of the few built on the coast. Tulum, back then called Zama (City of Dawn) was built during the late Postclassic period in early 13th century, and was occupied until the end of the 16th century. Tulum was an important trade hub, mostly trading turquoise and jade via land and sea routes. The city was surrounded with thick stone walls on the land side, and the sea side was protected by the 12-meter tall cliffs. The most important and well-preserved structures in the Tulum archaeological site are El Castillo, the Temple of the Frescoes, and the Temple of the Descending God.

How to visit the ruins 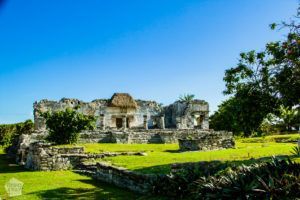 Tulum ruins can be visited around the year, from Monday to Sunday between 8 AM and 5 PM. There are tours available from for example Cancun, Playa del Carmen or of course from Tulum, but it’s easy to visit the ruins independently, especially if you stay the night in Tulum town. Most of the tour groups arrive to the ruins around 10am, so it’s best to head there before them, early in the morning. When we visited in late October, there was only a handful of people in the site around 9 AM, but by 11 it was quite crowded. Tickets to the site are bought in the entrance (don’t believe any touts who may try to sell you a “ticket” by the road leading to the ruins) and the price was 75 pesos (less than 4 € / roughly 4 USD) in Oct 2019.

What are the best ways to get to the ruins then? The archaeological site is just about 4 km from central Tulum. Public transportation options are very limited, but taxis are readily available, or it’s also well possible to simply walk. The best option, however, is to come by a bicycle! Several hostels in Tulum have bikes available for guests, and it’s also easy to find a rental bike. You could head to the ruins on the morning, and continue to the beautiful beaches south from the ruins before heading back to the city for dinner. Sounds like a great day, doesn’t it!

What to wear and take with you 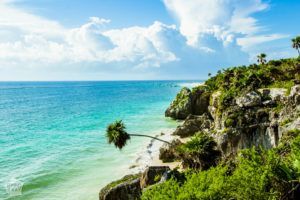 As it’s usually hot and often also humid in Tulum, dress accordingly and don’t forget a hat and sun lotion. Take into account that it’s also possible to swim from the beach right below the ruins, so it’s advisable to wear your swimsuit. There are no dressing rooms in the beach, but you could change in the bathrooms by the entrance of the ruins, there are no showers though. The beach under the cliffs is very photogenic, especially if you beat the crowds. When we visited, the access to the beach was closed early in the morning, but opened around 10 AM. 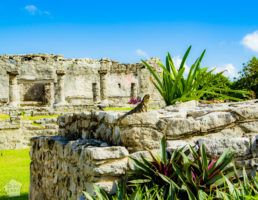 When exploring Tulum ruins, you’ll most likely meet some of the current inhabitants of the area. The site is home to large population of iguanas. These large, dark green or gray lizards like to sunbathe on top of the ruins, so it’s easy to spot them. Another, maybe more charming, species living in Tulum ruins is coati. These small mammals are relatives to raccoon, and have long tails and white noses (the species name is actually white-nosed coati). Cute fellows, just don’t try to pet or feed them, they are wild animals still, even if used to having people around. 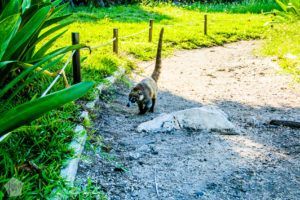 Tulum town is small but growing, and there is a tourist area with hotels, hostels, restaurants and bars. Accommodation options tend to be cheaper in the town than by the beach, so if you are on a budget, consider staying in the town and using bicycle to reach the beaches. We stayed in a guest house called Casa Lupita, a nice budget option with kitchen, bikes and even snorkeling gear in use. If you are new in airbnb, join now and get a discount of your first stay!

To get to Tulum on a budget, take a collectivo van from Playa del Carmen (or from Cancun via Playa del Carmen). These vans leave when full and are cheaper than buses, we paid 45 pesos, so not much more than 2 € / 2 USD per ticket from Playa to Tulum, and 42 pesos from Cancun to Playa. From Playa the collectivos to Tulum leave from near the crossroads of Calle 2 Norte and Avenida 20 Norte, and take you all the way to the main street of Tulum downtown. 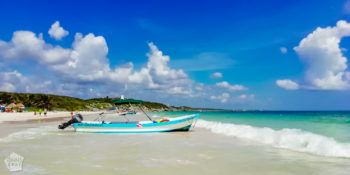 The coastal area south from Tulum ruins is often referred as the hotel zone of Tulum. However, it’s nothing like the big resort hotel areas, like Cancun hotel zone for example, but more like a natural beach with small hotels and restaurants, part of them on the beach and others on the jungle side. Accommodation options vary from camping sites to luxury cabanas and trendy retreats, so there is something for everyone. There is a long public beach between Tulum Ruins and the hotel zone, and the road running parallel to the beach is lined with palm trees, very nice for a bicycle ride! For some luxury but still with reasonable price, check out for example Tunich Jungle Cabañas, and for glamping and dipping in a cenote, check Cenote Encantado Tulum Eco-Glamping Camp further south the beach strip. 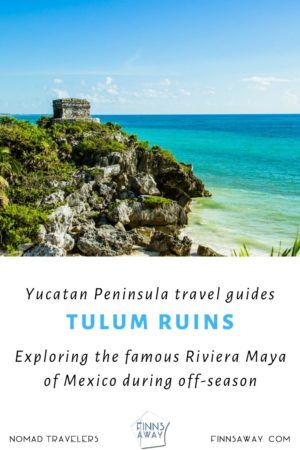