Nicosia – the divided capital of Cyprus

Nicosia, also known as Lefkosia, is the last divided capital in the world. It is a historical city with walled old town and gorgeous landmarks, but brutally split in two with a border zone, a wall that symbolizes the crisis that still today keeps the two sides of Cyprus apart. One half of the capital belongs to the Republic of Cyprus, another to the self-proclaimed Turkish Republic of Northern Cyprus. To build a picture of the complex and jammed situation, let’s take a short look to the history of the island first.

Historical background in a nutshell

Cyprus is the third largest island in the Mediterranean Sea and one of the oldest civilizations in the area, with cultural evidence from over 10 000 years back. The Mycenaean Greeks settled on the island 3 500 years ago, bringing along the Greek culture and rooting the Greek civilizations in Cyprus. Since then, Cyprus has seen several occupations and cultural revolutions by major powers. For over three centuries (1571-1878) Cyprus was under Ottoman rule.

After the island was placed under British administration in 1878, the Greek Cypriots pursued a union with Greece, and Turkish Cypriots began to aim towards a separate Turkish state in northern part of the island. During 1950s and 60s Cyprus saw a violent nationalist rising, and fell into crisis. Cyprus was granted independence in 1960, but that didn’t stop the tensions between Greek and Turkish Cypriots. From 1963 to 1974 there was a devastating period of civil war, after which Turkey took control of the northern parts and the island was divided in two, along a border that later became known as the Green Line. An independent government was established in the north, and in 1983 the northern part proclaimed as the Turkish Republic of Northern Cyprus (TRNC).

The Green Line and different halves of Cyprus

The Green Line is still today a demilitarized border zone, patrolled by the UN Peacekeeping Forces, and it splits the island and it’s capital city into two separate parts. TRNC is only recognized as an independent country by Turkey, and thus officially considered as part of the Republic of Cyprus. In practice, these two parts of Cyprus are quite different worlds.

The Republic of Cyprus is an EU country, and the currency is Euro. The dominant language is Greek and the majority of Greek Cypriots identify as Greek Orthodox. In the occupied Cyprus in north, the official language is Turkey and currency is Turkish lira. The majority of Turkish Cypriots are proponents of Sunni Islam. Northern Cyprus is leaning on Turkey, being politically and economically dependent on it. In addition, the Turkish army maintains a large force in Northern Cyprus and there are several inaccessible military zones.

The walled, old city of Nicosia

The medieval old city of Nicosia is circulated by the Old City Walls. It has seen the rise and fall of several civilizations, and has footprints from the Lusignan, Venetian, Ottoman and British periods. The Old Town is full of historical treasures, most of them well preserved. It has a glorious face of a city from the Middle Ages, but it also has the face of the war; the Green Line divides also the walled old town in two parts, and the border zone itself is a confusing and sad sight. It is a line of abandoned buildings, that can be partly on one side, partly another, with bullet holes in the walls. It is a line with barricades, barbed wires, guards and surveillance systems. It surely makes Nicosia a unique capital.

Crossing the border in old town

When in Nicosia, we stayed the nights in the southern side, but of course also visited the northern half of the city. Crossing the border between Cyprus and North Cyprus has been straight-forwarded since 2003, when Cyprus prepared to join the EU. After presenting your passport (and visa if you need one for Cyprus), you can simply walk over the border. There are several crossings points around the island, and one for pedestrians right in the old town of Nicosia. In most of the crossings points it’s also possible to cross with a car, but if you are renting, the safest option (from insurance point of view) is to rent one car for exploring the south and another in north side.

The Ledras Street border crossing inside the walled city is very popular among both locals and tourists, and the easiest way to see both sides of the old Nicosia. When crossing from south, you need to show your passport to Greek side police officers, then walk the short distance to another passport check point in north side. Every time we have crossed, it has been a very quick check with friendly service.

Two sides of the old town

The city wall that circulates the old town has three gates in southern Nicosia; the Paphos Gate, the Famagusta Gate and the Kyrenia Gate. The main sights include several handsome churches and museums like a Byzantine museum in Archbishop’s Palace. Ledras street, that connects the south and north sides of the old town, is a historical commercial street, considered as a sight itself. Around Ledras, the old town is a network of narrow streets and alleys, lined with small shops and cafes.

The general feel of the northern part of Nicosia is, quite naturally, more Oriental. Great amount of historical landmarks have been renovated, and the north side of the old town is something like an open-air museum. Probably the most important Ottoman period building is Büyük Han, the Great Khan. This gorgeous, fully renovated huge building ones served as an inn for travelers and merchants coming to Nicosia. Former sleeping quarters and stables are now a home to craft and art boutiques and small restaurants. During the day the Han is busy and full of tourists, but in the evening we got it almost to ourselves.

North Nicosia sights also include several stunning mosques, historical Ottoman mansions, squares and Turkish bazaars. There is a recommended walking route around the city past the main sights; it’s marked with paint in the streets and there are maps of the old city and the walking route almost around every corner, so it’s easy to follow. Don’t forget to pick up a brochure about the sights and the walking route from an info booth just after crossing the border.

After a day filled with walking around the old town and sightseeing, what could be a better way to relax than having some local craft beer? We found out that there is a microbrewery on south side, right in the middle of the old town. Pivo Microbrewery turned out to be a wonderful tiny craft brewery, owned by three brothers and a cousin, that share a passion towards the art of making quality craft beer and have learned some secrets of brewing when studying abroad. They are brewing classic craft beers such as American IPA, Bohemian Pilsner, Bavarian Weissbier and Czech Dark Lager, and also few seasonal and more unique brews.

The Pivo brew-house, that in addition to beer also serves hot and cold dishes and wine, has around 150 customer places and the atmosphere is warm and international. When in Nicosia, don’t miss out this brewpub; you’ll find it in Asklipiou street, just around 200 meters east from Ledras. To get to know the brewery online, check out their informative web-page. The owners and other staff are super friendly and welcoming, and they can show you around the brew-house, explaining how they produce their delicacies.

Have you ever visited Nicosia, or traveled elsewhere in Cyprus? Share your thoughts in comments! 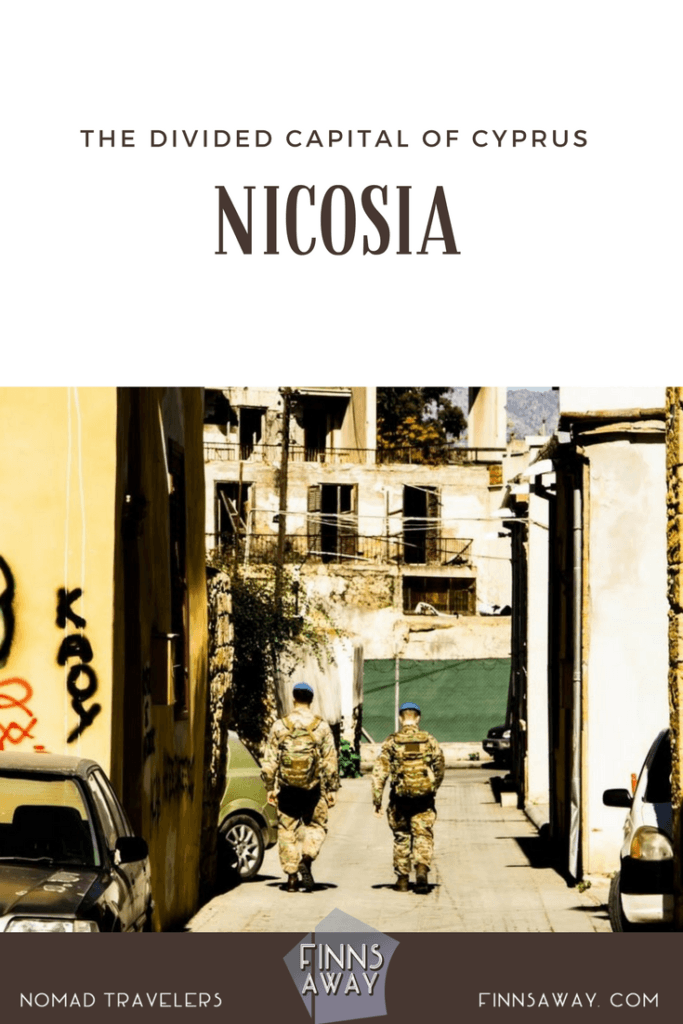 4 thoughts on “Nicosia – the divided capital of Cyprus”