How much you should budget for hiking days?

How to downsize travel budget?

In this money matters post we open up our expenses from September, when we enjoyed the city life and atmosphere in Budapest, hiked in the Carpathian mountains, drove through Romania and spent one week in Chisinau, Moldova.

During September we traveled in four countries; Slovakia (2 days), Hungary (9 days), Romania (12 days) and Moldova (7 days). Month started in Slovakia, hiking in Slovensky Raj and spending couple of nights in a hotel before heading towards Budapest. In Budapest Wine Festival we got free entry to the area, but spent about 20 EUR (6400 HUF) tasting the wines in the festival. There were wines from all price categories available, starting from 150 HUF (0,50 EUR) per small glass. 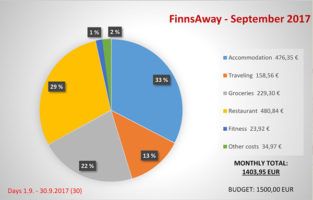 Here is a chart of all expenses from September divided in cost categories. We spent altogether 1403,95 €, which comes down to 46,80 € per day (23,40 € / day / person). So we did manage to stay well below the daily budget target of 50 euros, even so that now we are slightly under 50 € / day for the whole European road trip so far (exceeded the budget in August).

Unlike in last month, and a bit surprisingly, the biggest cost category was restaurants with 481 € (16 € per day for two). This includes all meals and drinks bought elsewhere than from grocery stores. We did have couple of late night-outs in Budapest, and have continued craft beer tastings in pubs also. In September we didn’t have that many accommodations equipped with kitchen, so we cooked less than in August. Which also shows in the groceries category, that is considerable smaller than in August, just 7,6 € per day.

Accommodation costs were altogether 476 euros, which is less than in August, even if we were only camping for three nights and spent two nights in mountain huts. The rest were double rooms in budget hostels or apartments booked via Booking.com and Airbnb).

The cost of traveling was just 5,3 € per day last month. This is mostly fuel costs and in addition new windscreen wipers, vignettes (road fees), one taxi  ride and some public transportation like metro in Budapest.

Diesel price has gone down when moving eastward, in Moldova it is somewhere around 80 cents per liter.

In the category ‘other costs‘ there are tickets to tourist attractions (in September to Slovensky Raj and Poenari castle in Romania), supplies like gas for the kettle and some occasional parking and toilet fees. Category fitness includes fees to gyms.

OK then, to the questions presented in the beginning. How much does hiking in the mountains in East Europe cost? Well, it’s not that dirty cheap as one could imagine. In Slovakia and Romania the mountain huts offer basic accommodation, but the price can be as high or even much higher than in hostels. If you have good enough gear to camp in the mountains (and if it is allowed in the area), you can save some money of course. Eating and drinking in mountain huts is not particularly cheap either, which is understandable since all groceries and beer cans need to be brought up using steep dirt roads. Bringing your own kettle and food is again the best option for hiker on a budget (and with strong enough knees to carry all the weight). In Fagaras mountains, where we slept in mountain huts and bought one meal a day, we spent around 40 euros per day (for two).

To the question whether Romania and Moldova are low cost countries – definitely, at least in European scale. We knew that travelling in this part of Europe is not nearly as expensive than in Central or even Southern Europe, but still it was a bit of a surprise how low the prices actually are.

Some basic tips how to downsize your travel budget

Share you thoughts about travelling costs and reveal your best budget travelling tips in the comment box below!