The southernmost part of continental France, by the Mediterranean Sea and just next to the Spanish border, is often called the Northern Catalonia of French Catalonia. Today forming the Pyrénées-Orientales department of France, most of this area was prior to the Treaty of the Pyrenees a part of the Principality of Catalonia, which again was part of the Kingdom of Spain. The Catalan roots and history are still today clearly visible in Pyrénées-Orientales, which, together with the beautiful nature, makes this region interesting to explore. In this post we introduce the medieval city of Perpignan, and Collioure, a cute port town by the Mediterranean. 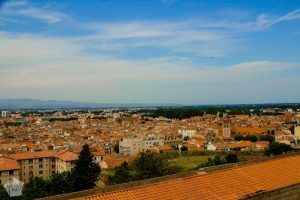 Perpignan is the largest city, as well as the administration center, of the Pyrénées-Orientales. It’s famous for being the capital of the Kingdom of Majorca in 13th and 14th centuries, and is still today home to the Gothic and Romanesque Palace of the Kings of Majorca. It’s a university town with a lively, medieval old town with attractions such as the former city gate and prison called Castillet, some handsome old churches, a cloister cemetery, Gothic city hall and a flower-decorated riverfront with several pedestrian bridges, one of them a medieval stone bridge. The rather small city center can be explored on a day trip from the nearby beach holiday destinations, and Perpignan is good starting point for exploring the French Catalonia area overall.

Palace of the Kings of Majorca 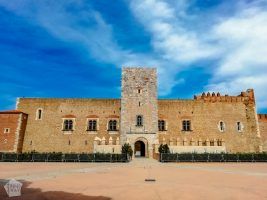 The biggest tourist attraction in Perpignan, in addition to the old town center with its restaurants, is the Palace of the Kings of Majorca (Palais des rois de Majorque), also known as the royal castle of Perpignan. This medieval Mediterranean palace was built on the hill by the name Puig del Rei between the years 1274 and 1309, and it was until the 15th century surrounded with meadows, forests and vineyards, and it’s said that lions used to roam in the moat of the castle. The first residents of the royal living quarters were King Jaume (James) II of Majorca and his family. Today the renovated palace is, in addition to a tourist destination, a venue for concerts during the summer months.

Inside the outer walls of red brick, surrounded with gardens, is the castle itself, partly built of beautiful, pastel-colored marble of the Pyrenees-Orientales. Visitors can enter the halls and the royal apartment around courtyard as well as one of the towers and the chapel. The views from the roof of the tribute tower are great, over the old town of Perpignan as well as towards the sea. Entrance fee to the palace is 4 € (2 € for children), and an informative map of the palace can be collected from (and returned to) a stand next to the souvenir shop near the entrance. Reserve a couple of hours for exploring the different parts of the palace.

Charming Collioure by the Mediterranean 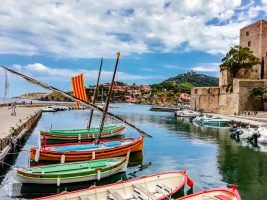 The coast of Pyrénées-Orientales is dominated with long beaches, both sandy and pebble, and beach resort towns. There are also some handsome, rocky coves and small port towns, most of them former fishing villages. This area proudly states to be one of the sunniest in France, getting 320 days of sunshine per year. We were not very interested in the beaches or the holiday resorts, but were happy to come across Collioure, a small Catalan port town south from the beaches of St. Cyprien and Argeles-sur-Mer. 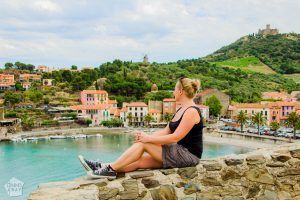 Collioure is a charming combination of beautiful nature, historical buildings and colorful town center. The landscape surrounding the town consists of rocky shores, turquoise waters, beaches, green hillsides filled with terraced vineyards and olive groves, and of foothills of the Pyrenees Mountains (with hilltop forts) in the background. There are several castles in Collioure, the most central one being the Royal Castle (Chateau Royal de Collioure) that overlooks the Collioure Bay. It is a majestic structure rising from the sea, built on the site of a former Roman fort in late 13th century. The Chateau used to be the court and summer palace of the Kings of Majorca. The outer walls were added and other improvements made in late 17th century by French royal military engineer Vauban. We only admired the castle from the outside, but you can get inside and on top of the castle with paying the 4 € entrance fee. 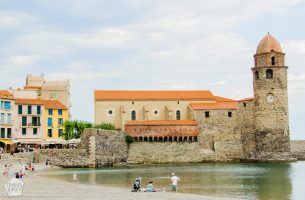 By the Collioure Bay, there is also an extraordinary church called Notre-Dame-des-Anges, Our Lady of Angels. The handsome, round tower of the church is actually originally a medieval lighthouse. Above the bay, the old town cobblestone alleys, with houses painted in bright colors and decorated with flowers, are adorable. A bit outside the center, up in the hills you can see a shape of a windmill. Le Moulin de Collioure is originally a grain mill from the 14th century, restored in 2001. It is now used for pressing olives, and for making Collioure olive oil.

We only made a short visit to Collioure when exploring the surroundings of Perpignan, but recommend reserving a whole day for exploring the different parts of the town and the historical buildings, and for enjoying the beauty of the area or maybe dining in one of the restaurants by the coastline. If you’d like to stay overnight, there are accommodation options from seaside resorts to hotels and from campsites to apartments, though during the peak season in August you may want to reserve well ahead. We stayed in peaceful and affordable Camping La Mignane in Elne, roughly 20 kilometers northwest from Collioure. 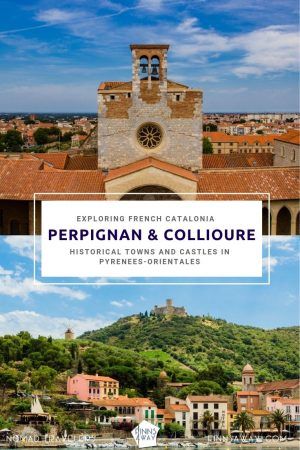