Cyprus is home to some amazing archaeological sites. One of them is Ancient Kourion, located just 17 kilometers west from busy Lemesos (Limassol). The site, with a picturesque hill-top location with views to the Mediterranean Sea, consists of ruins from Hellenistic, Roman and early Christian era ruins. This site makes a great day trip from Limassol, combined with the medieval Kolossi castle just a few kilometers away. In this post we shortly introduce the site, and provide some tips for your visit.

The ancient Kourion, also known as Curium, dates back to 8th century BC, and was one of the greatest city kingdoms of ancient Cyprus. It is named after colonist Kouriefs, and was founded by settlers from Argos in Peloponnese, Greece. The first building of the city was a monument for God Apollo Hylates, who was considered as the protector of Kourion. The site itself is even older though, and undoubtedly there is huge amount of ruins that haven’t been uncovered yet.

In the archaeological site the oldest ruins are from the Hellenistic period 350 -50 BC. Roman period began in 50 BC, and soon after a series of earthquakes destroyed buildings and led to building programs in 1st to 3rd century AD. In early Christian era, starting from 4th century AD, the construction continued, and a basilica church was built.

The monuments in Ancient Kourion

Starting a tour from the visitor center, the first monument is the Theater of Kourion. This amphitheater, dating back to roughly 2nd century BC, and could seat up to 3 000 people. The original theater suffered from the earthquakes and abandoned in 4th century AD, and the current structure is mostly a result of a reconstruction. Next to the theater is the House of Eustolius, originally from Roman period. There are remains of mosaic floors, and the structure follows the architectural model of a Roman villa.

The other ruins can be reached following the walking paths leading to the top of the hill, above coastal cliffs. First building on the route is the Earthquake House, a ruin of a residence building from the 1st or 2nd century. Further up you’ll reach the impressive ruins of the Early Christian Basilica from early 5th century. Next to it are the remains of Roman Agora complex, the Stoa and the Northeastern Hellenistic public structure.

The largest ruin of Kourion is the 1st century Roman Nymphaeum, a sanctuary for the Nymphs, surrounded with complex of Roman baths and public buildings. Still further along the walking path you’ll reach the Roman era House of the Gladiators with its mosaic floors that picture the gladiators. Preserved mosaics can be found also in the 4th century House of Achilles, around the pagan themes. This once gorgeous house was supposedly used as a reception for important visitors.

How to visit Kourion

Kourion can be reached from Limassol using public transportation, just hop in a city bus number 16. If you have your own wheels, there is a free parking lot just next to the Kourion visitor center. Tickets to the site are 4,50 € for adults (Jan 2019) and they are bought from a booth along the way up to the parking lot. The site is open 8:30 AM – 5 PM during the winter months, and until 7 PM during the summer season. Seeing the whole site requires some walking, and part of the paths on the hill top are not paved, so good walking shoes are recommended. During the summer take some water, a hat and sunscreen with you. Part of the site is accessible also with a wheelchair. The visitor center offers information leaflets about the monuments.

When planning a visit to Ancient Kourion, include also the medieval Kolossi castle in the nearby Kolossi village in your itinerary. The current castle dates back to 15th century, and the original structure most probably to 13th century. The castle had strategic position in the Middle Ages, and there were facilities for producing sugar from the local sugar cane. The castle can be reached from Limassol by bus number 17, and to continue to Kourion, jump in bus 16 in the main street that goes through the Kolossi village (Leoforos Apostolou Louka). If you want to stretch your legs, it’s a 6,5 kilometers walk from Kolossi to Ancient Kourion. Ticket price to see the castle from inside is 2,5 € (Jan 2019). 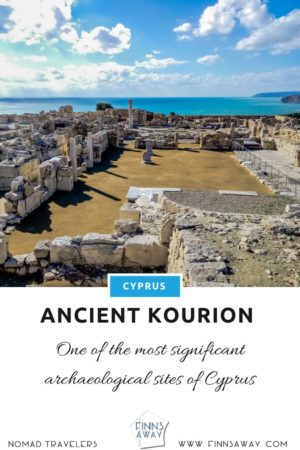