Lyon, the third-largest city of France and the capital of Auvergne-Rhône-Alpes region, is a beautiful city with a long history. The city was founded by the Romans, on Fourvière Hill at the confluence of the rivers Rhône and Saône, back in year 43 BC. The first residents were Roman refugees expelled from nearby Vienne, that was a major center of the Roman Empire. The location of Lyon, back then known as Lugdunum, by two navigable rivers, was strategic, and it soon grew as an important hub and starting point of Roman roads in France. During the Renaissance, the city bloomed and developed driven by silk trade, and in 19th century it turned into and important industrial town. There are four UNESCO listed, well-preserved historical districts in Lyon today, introducing the history of the city to visitors. In this post we share pictures and short stories from our visit to the city in summer 2019.

Fourvière Hill is the oldest part of Lyon, and still today home to remains from the Roman era. There are two ancient theatres, the Grand Theatre and the Odion Theatre. The Roman theatres are primarily tourist sites today, but also act as venues for some cultural events. The landmark of the hill is the Fourvière Basilica, or the Basilica of Notre-Dame de Fourvière, an elegant church built in the end of the 19th century in Byzantine and Romanesque style. The interior of the basilica is richly decorated with mosaics and stained-glass windows. Besides historical sites, a walk in Fourvière Hill offers great views over the city.

The area between Fourvière Hill and Saône is known as Vieux-Lyon, the Old Lyon district. It is a charming maze of Renaissance streets and staircases climbing up the hillside. Majority of the 15th and 16th century buildings used to be homes to wealthy Italian, German and Flemish merchants and bankers, and their families. There are a lot of secret, covered passageways, called traboules, between the main streets, and small inner courtyards. Today Vieux-Lyon is also home to a lot of restaurants and boutiques, and the streets are busy with both locals and tourists especially during the summer months. The primary throughfare of Vieux Lyon is Rue St-Jean street, once the center of Lyon’s silk industry and trade.

Vieux Lyon is naturally also home to several old churches. The most famous of them is Cathédrale Saint-Jean-Baptiste, also known as Lyon Cathedral or Saint John’s Cathedral. This handsome Romanesque and Gothic style church is the seat of the Archbishop of Lyon. Located by the Saone river, this cathedral is famous for its large rose window and a 14th century astronomical clock.

The Presqu’île in the heart of Lyon, on the strip of land between Rhône and Saône rivers, is another historically significant district of the city. Place Bellecour square is a good starting point to explore the area. This plaza is the largest pedestrian square in Europe, surrounded with several historical buildings and landmarks. A walk north through Cordeliers – Jacobins area, along the city’s main shopping streets and past the beautiful Palais de la Bourse de Lyon, will take you to another significant square Place des Terreaux.

Place de Terreaux has played an important role in Lyon throughout centuries. It was originally part of a walled fortification and turned into a plaza in the 17th century. During the French Revolution, it was a site for a lot of beheadings by a guillotine. It’s lined with imposing buildings, like the City Hall and the Museum of Fine Arts of Lyon. After exploring this plaza, head to close-by Place Louis Pradel to see the Opera House of Lyon. Further north, you’ll arrive to the second hill of Lyon, the La Croix-Rousse district. This area, with colorful apartment buildings lining the streets that climb up the hill, was in the 19th century home to the silk-workers of the city. The silk tradition is still visible in Croix Rousse, and today the area houses a lot of workshops of designers and artists.

Tips for your trip

Lyon is a big city, and exploring just the historical districts takes a lot of time, as there is always something interesting around every corner. We recommend reserving at least a couple of days for just sightseeing – a long weekend in the city would be great for combining walking tours around the different districts and enjoying the cuisine of the city. For reasonably priced hotel accommodation right in the city center, check out for example Hotel de La Marne, or if you’d like a bit more upscale feel, for example Hotel Vaubecour. There are also a lot of apartments for short term rent in the city center. The prices of hotels and other accommodation rise in the holiday season, so budget travelers should consider visiting outside the busiest months, or to stay outside the city center.

Have you visited Lyon or is it on your bucket list? Share your thoughts of the city in comments! 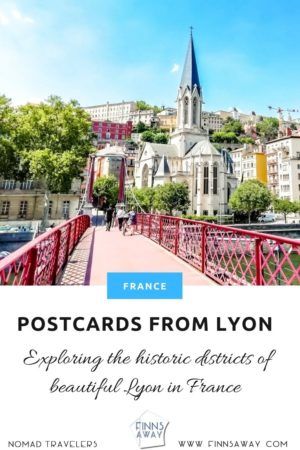