If you don’t know much about Romania, the only things coming to mind may be the name of the capital (Bucharest) and the legends of Dracula. It’s not so widely known, that the country is the largest in Southeastern Europe, nowadays member of the EU, and has several lively historic cities, while there still also are areas which look like they have remained the same for centuries with the traditional life style.

As much as 27 % of the territory of Romania is undisturbed forest, there are 13 national parks and Carpathian Mountains dominate the center of the country with 14 mountain ranges with peaks that exceed 2 000 meters. Highest mountain is Moldoveanu Peak that reaches 2 544 meters. There are almost 400 mammal species in Romania, and approximately 50 % of all brown bears and 20 % of wolves of the whole Europe (excluding Russia). There are four distinct seasons and climate is continental with relatively hot summers and cold winters.

There definitely is a lot to see and do in Romania, from beach holiday by the Black sea to conquering the mountain peaks, and from having cappuccino in charming old towns to spotting castles in jaw-dropping landscapes. One of the main goals for our visit in the country are the mountains, but we are looking forward to seeing as much as possible in few weeks and spending time in bigger cities and coastal Romania, as well as in the rural areas.

Since we arrived in the country from Hungary, we crossed the border in northwestern corner of Romania. For the first time we needed to stop at the border and show our passports, but it was just a quick check with no queuing. We learned later, that we should also have bought a vignette, a permission to drive in the country right away when arriving. That can luckily be taken care of online nowadays, for example via roviniete.ro, and it costs just few euros, depending the length of your stay. Our first stop was in the city of Oradea, where we stayed in Pension Eclipse, a nice place still today, even if it looked like it had its  golden days back in the 80’s.

Our first hiking destination was the Apuseni Mountain region and national park in northwestern Romania, not that far from the Hungarian border and Oradea. We found some information about the trails online, so we decided to download some maps and instructions and not to buy any hiking map for just one day of trekking. We chose a trail called Somesul Cald tour, and to reach the trail end, drove up to tiny Padis village quite high in the mountains in Bihor-Vladeasa area (basically in the end of paved road 763 via Pietroasa up to the mountains). This trail is rated as difficult and only accessible in summer season, but it’s well worth a hike since there are several caves and a high canyon with vertical limestone walls on the route. Check out the below instructions how to do this hike if you are interested, and of course the pictures in the gallery!

The actual starting point (known as Vărășoaia tourist hostel, but it looked like it’s not in operation anymore) for the circular trail could be reached by car via small forest routes, but as it’s not that far from the main road, we started from along the road. We parked the car close to Padis village on a parking lot of a white building that had no signs, but it probably serves as a pension hotel on high season. It’s easy to recognize the building from a picture in our gallery. There are path information signs just by the road, and they point out a blue-line marked trail that leads to the starting point of Somesul Cald tour, which is then marked with red rounds. 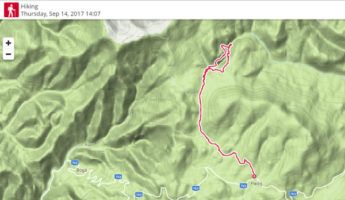 After walking the blue trail for a little less than an hour, along some forest routes and dirt roads, past the Vărășoaia tourist hostel and several flocks of sheep with shepherds, the other trails turn left and Somesul Cald tour starting point is on the right side. There is an information sign with a map (which was really confusing since the “you are here” marking was not in the correct point but in the other end of the trail instead…) and some info about the trail also in English, which was a nice surprise.

Trail starts with a short walk along a forest path that descends to a water stream, and shortly you can see the 15 meters high entrance to Radesa cave. The trail goes right through the cave (or as an option and when coming back, along a path on top of the cave), which makes things interesting. First part of the cave is the large main hall, with just enough light coming from the holes to be explored without a torch. But to be able to go all the way through, a head lamp is a must (both hands are needed for climbing).

From the hall the trail goes down to a narrow, dark canyon, and metal chains bolted in the rock are needed for the climb down to the bottom. Waterproof hiking boots are a good choice, since there is a stream flowing on the bottom of the cave canyon. It was pretty exciting to go down to the darkness and continue along the canyon, luckily we had two strong head lamps to show the way. After a while walking with no natural light, you’ll see some coming from the openings high above in the roof of the cave.

After getting out on the other side of the cave hill, the path (when walking the circle counterclockwise like we did) continues upwards to the forest and is easy to walk. Going upwards it then reaches the highest point up in the edge of Radesa Canyon (1349 m). There is a nice viewpoint from where you can admire the opposite limestone wall, and the stream in the bottom of the canyon. Continuing down to the bottom of the canyon soon after the viewpoint was quite difficult, since the slope is really steep and the soil is slippery. There are some roots and tree branches that can help with keeping your balance when slowly finding the steps / sliding down. There is a small cave next to the trail on the way down.

At the bottom you need to cross the small river, and then the circular trail turns back towards the starting point. There is quite steep climb back up to the other side of the canyon, and again some more caves along the way. At this point we were a bit in a hurry, since we wanted to get out of the forest before it gets dark, so we couldn’t explore the other caves. Nice and easy forest path leads back to Radesa cave, and over it past the openings that earlier could be seen from the bottom of the cave. Then you soon are back in the starting point of the circle, from where it’s then just last the 3 km along the blue-marked path back to the main road and you are done.

Total length of the trail is 15 km (out of which 8 km in the circular cave path) and it took us all together 5 ½ hours. It’s recommended to allow a bit more time though to explore all the caves on the way.

Thrilling drive down from Apuseni mountains

There would have been bunch of other interesting trails in Apuseni mountain area, and there are decent accommodation options and camping is also possible. However, we needed to hurry on, since we wanted to explore the highest mountain range in Romania, the Fagaras mountains, during the coming next days when it was supposed to be still warm and sunny weather.

When getting back down from the Apuseni mountains after the hike we had the most interesting driving experience so far… We had booked accommodation from Pensiunea Marydor in Garda de Sus village on the south side of Apuseni. HERE maps, that we are using for off-line navigation, instructed to use a shortcut instead of going back all the way to the highway. It sounded like a good idea, since it was already getting late and this route would have been dozens of kilometers shorter.

Well, this alternative road was paved in the beginning, but then it started to get smaller and smaller. We didn’t want to give up of course, so we ended up basically in the middle of some grazing land and the ”road” looked like only a tractor could make it any further… It wasn’t that funny to be there, in the pitch-black night, afraid that our poor Nissan would fall apart any minute, but after turning around and making it back to the main road, we knew that this was one of those travelling memories that won’t fade away anytime soon. 🙂 Drive to Garda was exciting also via the ”normal” road in the thick darkness, since it is a zig-zagging drive on the slopes of the mountains.

Garda de Sus is somewhat famous for the Scarisoara ice cave situated just next to it, but we actually didn’t know anything about it before arriving in the village. Cave that houses a glacier up to 20 m thick and has several rooms with ice cliffs and ice stalagmites would surely have been worth of visit, if only we would have had more time to spend. But Transylvania was calling, and it was time to hit the trails in higher mountains.

In the next post you can read all about our awesome 3-days adventure in Fagaras!